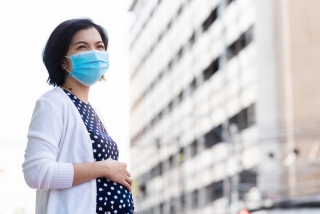 Giving birth can be a joyous, yet stressful experience in the best of times – but what happens when a global public health crisis is thrown into the mix? McGill University and the University of Toronto researchers examined the effects certain pandemic policies have had on the mental health of Canadian women who gave birth during the COVID-19 pandemic.

The study, recently published in CMAJ Open, focused on the impacts and unintended fallouts of policies rapidly implemented to reduce SARS-CoV-2 transmission and the discrepancies between aspects of care considered essential and non-essential in the case of birth giving and postpartum aftercare.

Little to no support for new mothers

The researchers examined how pandemic-safety policies were tied to increased levels of stress, anxiety, and depression and how they exacerbated struggles faced by new mothers.

“From this study and from prior, large-scale online survey research, we know that the pandemic and pandemic policies isolated new parents more than normal and had a huge impact on postpartum mental health. What was missing until now is an in-depth look at the experiences that underscore this. Our study points to exactly which pandemic policies have posed serious challenges for pregnant people and new parents and shows the unintended outcomes of these.” explains Kathleen Rice, Assistant Professor in McGill’s Department of Family Medicine and co-author of the study.

The findings drew on 65 in-depth interviews with women across Canada who were pregnant and/or gave during the COVID-19 pandemic. “We found that policies restricting support people such as spouses and relatives at home and in hospital during the early postpartum period have caused real harm, especially for first-time parents, those who have had medically complicated deliveries, and those with preexisting mental health struggles,” adds Prof. Rice, who holds the Canada Research Chair in the Medical Anthropology of Primary Care.

A right to dignity

The researchers produced evidence-based suggestions to remedy the unintended effects of pandemic polices including allowing a spouse, friend or family member to remain for an entire hospital stay, allowing additional help in the home during the early postpartum period, and offering in-person breastfeeding support.

In terms of next steps, the researchers, alongside additional collaborators, will look more closely at how specific communities have been impacted – for instance, partners of birthing people, and minority communities. A forthcoming publication will also address concerns about increased medicalization of childbirth during the pandemic, and an increased use of interventions such as induction of labour as a means of addressing controlling patient flow in the hospital during the pandemic.