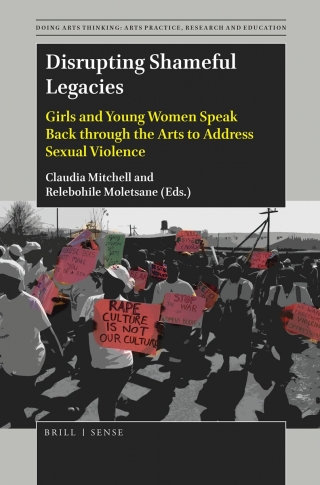 Claudia Mitchell has co-edited a new book:Disrupting Shameful Legacies: Girls and Young Women Speaking Back through the Arts to Address Sexual Violence (Brill Publishers). The book is co-edited with Relebohile Moletsane of the University of KwaZulu-Natal in South Africa. The book is now available online through Brill.

Much has been written in Canada and South Africa about sexual violence in the context of colonial legacies, particularly for Indigenous girls and young women. While both countries have attempted to deal with the past through Truth and Reconciliation Commissions and Canada has embarked upon its National Inquiry on Missing and Murdered Indigenous Women and Girls, there remains a great deal left to do. Across the two countries, history, legislation and the lived experiences of young people, and especially girls and young women point to a deeply rooted situation of marginalization. Violence on girls' and women's bodies also reflects violence on the land and especially issues of dispossession. What approaches and methods would make it possible for girls and young women, as knowers and actors, especially those who are the most marginalized, to influence social policy and social change in the context of sexual violence?

Taken as a whole, the chapters in Disrupting Shameful Legacies: Girls and Young Women Speaking Back through the Arts to Address Sexual Violence which come out of a transnational study on sexual violence suggest a new legacy, one that is based on methodologies that seek to disrupt colonial legacies, by privileging speaking up and speaking back through the arts and visual practice to challenge the situation of sexual violence. At the same time, the fact that so many of the authors of the various chapters are themselves Indigenous young people from either Canada or South Africa also suggests a new legacy of leadership for change.

Claudia Mitchell is a James McGill Professor in the Department of Integrated Studies in Education, director of the McGill Institute for Human Development and Well-Being (IHDW), and an Honorary Professor at the University of KwaZulu-Natal. She has written extensively in the area of girlhood studies and is the co-founder and editor-in-chief for the award-winning Girlhood Studies: An Interdisciplinary Journal.