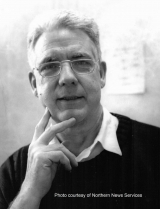 Dr. Harold Don Allen, who taught generations of math students and future teachers, instilled a sense of wonder in bright young people about the beauty of numbers and cryptograms, brought a storyteller's passion to the curation of numismatic history from banknotes to milk tokens, and loved nature and the lore and the lure of the Canadian North, passed away quietly on July 11, 2020 in Brossard, Quebec, the family at his side.

After graduating from the High School of Montreal (as Dux of the school, the highest award a school can bestow on a student, the overall award for academic excellence), where he would later return as a math teacher, Allen entered McGill University in 1949, completing his BSc in Mathematics and Physics with Distinction in 1952 and high school teaching certificate a year later. In his 1952 McGill University yearbook, Don Allen wrote “The secret of success is constancy of purpose”, presaging a lifelong commitment to teaching and inspiring others – in the classroom and through his carefully-researched, internationally-acclaimed writing. An award-winning young journalist, he wrote extensively for the McGill Daily, had a weekly science and math column for children in Verdun's The Messenger “How and Why by Uncle Don" which ran to over 200 issues, and developed skills in radio broadcasting that would serve him throughout his career.

Allen was awarded Masters degrees from Santa Clara University in 1966 and Rutgers University in 1968, having pursued both with “constancy of purpose” during the summer holidays over the previous decade. His doctorate in mathematics education, a source of enormous pride for him throughout his life, was conferred on him by Rutgers in 1977. Click here to read Dr. Allen's full obituary.