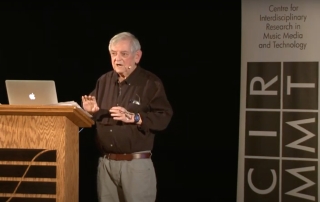 Joel Chadabe, CIRMMT's lifetime member and member of the Centre's International Advisory Board, passed away on Sunday, May 02. He was 82.

His importance to the computer music community cannot be overestimated. As a renowned composer, educator, thinker and entrepreneur,  he was one of the leading figures in this area for more than five decades -- a true pioneer! His initiatives have impacted hundreds if not thousands of people: former students, colleagues, friends and music enthusiasts in many ways. A glimpse of his extraordinary contributions is available at joelchadabe.net.

Joel Chadabe was the first invited speaker for the student symposium in 2009, chosen by CIRMMT students, and since then, he has regularly participated in or co-organized CIRMMT activities.

In 2013, Joel became a member of the International Advisory Board of CIRMMT and spent a month at the Centre as a Fulbright visiting specialist in 2015.

In 2019, CIRMMT was delighted to offer lifetime membership to him in recognition of his seminal contributions to the computer music community as a pioneer on interactive music systems, entrepreneur, and renowned educator, as well as for the inspirational role he played at CIRMMT over a decade.

One of his many seminal contributions, Joel assembled one of the earliest examples of large, modular analog synths in the late 60's at SUNY Albany in collaboration with Robert Moog: The Coordinated Electronic Music Studio (CEMS).  Recognizing the importance of this achievement 50 years later, CIRMMT organized a workshop on the re-birth of analog synthesis centred around Joel, bringing his unique insight to a new generation of synthesizer enthusiasts. Over a hundred attendees of all ages came to celebrate Joel as he gave a talk on Music as emergence and interacted with participants in the workshop. A video of his talk is available at https://www.youtube.com/watch?v=zATg_yFCNpQ

As CIRMMT's former Directors, we feel privileged to have had such luminous moments with Joel, a mentor and a friend. On behalf of CIRMMT, we would like to say thank you again and again, Joel!