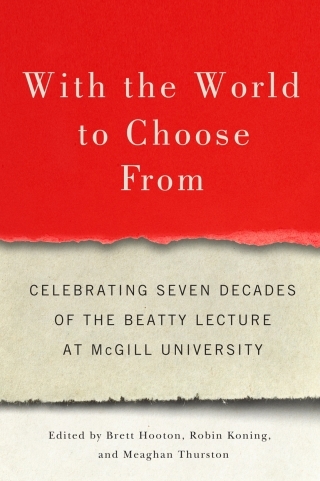 Research and Innovation began discussion with MQUP about publishing an anthology of McGill’s Beatty Lectures in 2017. The anthology, published during McGill’s bicentennial year, draws upon extensive archival research to bring to print, most for the first time, 15 standout Beatty Lectures. The book features a selection of 55 photographs and historical documents. With the anthology’s release, readers can discover - or rediscover - these important and inspiring lectures.

“In 2021, we celebrate this great university’s 200th anniversary, a remarkable milestone to reach, and a unique time for reflection,” writes McGill’s Principal, Suzanne Fortier. “This anthology shines the spotlight on fifteen standout lectures spanning the past seven decades. In doing so, it serves as a tangible record of the Beatty Lecture’s reach and influence, as well as our own collective history.”

One of the twentieth century’s most influential visionaries, the economist Barbara Ward, opens the anthology with her future-looking 1955 lecture. Lectures from acclaimed biologist Robert Sinsheimer, former Soviet leader Mikhail Gorbachev, Nobel Prize laureate Muhammad Yunus, philosopher Charles Taylor, and author and social commentator Roxane Gay carry readers through the decades that followed and up to the present, treating subjects from the tensions of Cold War politics and the implications of genetic engineering to the origins of life in the universe and the watershed #MeToo movement.

Some of today’s leading academics add contextual and biographical information to each lecture, and an introduction sheds light on the history of the Beatty Lecture and the life of its notable namesake.

To launch this anthology, on Tuesday, September 21, McGill Professor Emeritus Charles Taylor (whose 2017 lecture is featured in the collection) joins Dr. Rowan Williams (former Archbishop of Canterbury, whose preface introduces the lecture) for a conversation on the importance of public discourse and the role of the public intellectual. The virtual event also includes a visual tour of key moments in Beatty Lecture history, a book giveaway contest and more.

For more details and to register for the launch event, visit https://www.mcgill.ca/beatty/book

For more details on the anthology visit the MQUP website