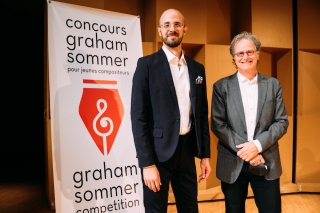 The Graham Sommer Competition is proud to announce that Matthew Ricketts is the grand prize winner of the second edition of the  Graham Sommer Competition for Young Composers. The $18,000 first prize for Matthew’s new work for piano trio, “Still There,” was among $54,000 in total prize earnings awarded at the Concert and Prize Gala on Sunday, September 26 at Pollack Hall. This national competition for Canadian composers under the age of 35 was founded by Dr. Graham Sommer (1946-2016), MDCM’72, a graduate of McGill University’s Faculty of Medicine and an accomplished pianist and devoted music lover. The inaugural edition took place in 2018.

Five finalists were selected out of 61 Canadian applicants from across the country and living abroad. They were each commissioned to write a new work for piano trio, which were premiered by the Graham Sommer Trio:  Amy Hillis, violin; Chloé Dominguez, cello; Meagan Milatz, piano.

Born in British Columbia, Matthew Ricketts is a Canadian composer currently based in New York City. His music moves from extremes of presence and absence, from clamour to quietude, at once reticent and flamboyant. He is a 2019 Guggenheim Fellow and a 2020 Gaudeamus Prize nominee. He has also received numerous awards and grants, including eight SOCAN Foundation Young Composer Awards. His works have been heard around the world and performed by numerous ensembles and orchestras including the Mivos Quartet, Quatuor Bozzini, le NEM, the Aspen Philharmonic (Robert Spano, cond.), Esprit Orchestra (Alex Pauk, cond.), the Minnesota Orchestra (Osmo Vänskä, cond.) and the Montreal Symphony Orchestra (Kent Nagano, cond.). Matthew holds degrees from McGill University (BMus'09) and Columbia University (DMA’17), and is currently a Core Lecturer at Columbia University.

The winning piece, as well as all of the performances from Sunday afternoon, may be viewed here.

The $12,000 second prize was awarded to Alec Hall for his work, “The National Anthem,” with the three $6,000 honourable mention prizes going to Laurence Jobidon, Michael Kim-Sheng and Jared Miller. “Burning in Clarity,” Michael Kim-Sheng's work was also awarded the $6,000 People’s Choice Award, voted upon by the audience in attendance at the concert as well as online. More details on the five finalists may be found here.

Part of the 25th edition of Quebec’s Journées de la culture, the Concert and Prize Gala was presented for free to the public, in person and via webcast, and was accompanied by a discussion with the finalists and Schulich School of Music Composition Professor, Chris Paul Harman on Saturday, September 25.

Dr. Graham Sommer died on October 2, 2016 and left a legacy of excellence in medicine and an abiding love for the transformative power of music. A native of British Columbia, Sommer graduated from McGill’s Faculty of Medicine in 1972 and went on to hold positions at Yale and Stanford Universities, becoming a world-class researcher for 37 years.  Dr. Sommer’s enduring passion for music has resonated at McGill notably through the Dr. Graham Sommer Piano Fund, which supported the restoration of pianos in McGill residences and the purchase of a new piano for Douglas Hall. While Sommer excelled in his chosen field of medicine, he was also inspired by a lifelong love of music fostered by his own accomplishments as a classical pianist and composer.