Lighting the way to improved biomaterials

Q&A with the Sleiman Lab 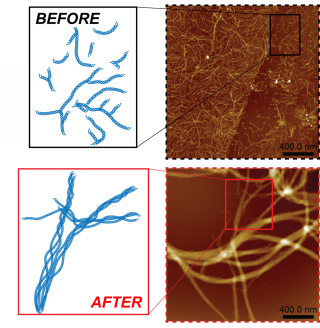 Researchers from McGill University believe that they have found a way to improve the development of biomaterials that could be instrumental in drug delivery, tissue regeneration, nano-optics and nanoelectronics.

The team, led by Hanadi Sleiman, Full Professor and Tier 1 Canada Research Chair in DNA Nanoscience in the Department of Chemistry, developed a method inspired by the way nature repairs defective materials in order to create sturdier forms. They used the radiation from a smart phone camera to “relax” DNA-based structures and create life-like materials that can be varied on-demand and be used for various purposes.

What questions did you set out to answer?

We were interested in whether it was possible to develop new chemical procedures that could better mimic natural processes and create life-like biomaterials with varied and malleable structures that could be used in materials science and tissue engineering. Nature uses the constant input and transformation of energy to modulate the form and function of its chemical systems. In tissues such as collagen, this energy conversion results in fibres with different properties, leading to variations in their elasticity and robustness. In contrast, man-made fibres are made using static manufacturing procedures and do not offer these dynamic behaviors, making it difficult to regulate their properties.

In this study, we sought to pair supramolecular DNA fibres with a light-responsive small molecule to introduce dynamicity into these structures, in a way that is similar to how nature controls the function of biological tissues. DNA is an attractive construction material for generating new fibrous architectures due to its predictable assembly and molecular recognition properties. It is also inherently dynamic, making it an ideal candidate to produce biocompatible materials with tunable properties.

What did you find?

When these components are mixed at room temperature, they assemble into DNA triple helices that combine into micron-length fibres, which then interconnect and grow into large, tangled networks. These architectures have structural defects, limiting their utility in materials science and tissue engineering applications.

To remedy this issue, we used a photochemical system to regulate the assembly of DNA-based structures and developed a procedure wherein fibres are disassembled upon irradiation from a smartphone camera, then sequestering individual DNA strands into a high energy, double-stranded DNA. When the light is switched off, the DNA strands are slowly released from their high-energy storage depot, and the fibres reassemble.

We found that as this relaxation from the high energy occurred, the initial interlocked product was not reformed: instead, individual fibres aggregated parallel to one another, generating thick “nanocables” with improved mechanical properties and higher thermal stabilities.

By employing our photochemical approach, the assembly pathway of polymerization is altered, impacting local fibre structure. Fibres formed using our strategy have fewer structural defects than those grown without cycle activation. Our more ‘perfect’ individual fibres are thus prevented from branching and are instead encouraged to aggregate along their axis of polymerization, giving rise to robust and organized cables.

Why are the results important?

One of the advances of this work is the development of new characterization methods (jn collaboration with the laboratory of Prof. Gonzalo Cosa) to understand assembly at the single-fibre level. While single-molecule fluorescence techniques have been widely used to study biological systems, this study marks the first direct observation of the different mechanisms of supramolecular polymerization, and the first optical assay developed to probe the heterogeneity of supramolecular polymers.

We anticipate that these new methodologies will be broadly applicable to the study of both natural and synthetic materials and may provide important insight into how nature controls the properties of its functional tissues, enabling scientists to produce more dynamic and tunable materials.

When we identify imperfections within a material, we can disassemble it and change the pathway of its reassembly to refine the structure. This results in sturdier biomaterials that can be used as scaffolds for cellular growth, tissue regeneration, and nanomaterials organization.