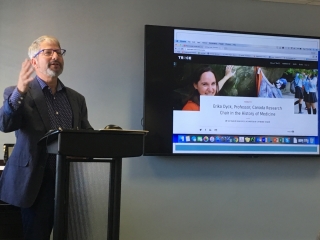 For the past four years a cross-Canada project developed by McGill University, TRaCE, has been gathering stories and data about life after (and during) a humanities PhD.

To shift the expectations of PhD students away from a single-minded focus on a future in academe (since only about 30% will end up with tenure-track jobs) and give them a sense of a range of satisfying possible careers.

Why cover this story now?

Because, over the next 3 years, the research is both broadening . . . and focusing.

Broadening, by recounting the experience of PhD students from all faculties. Focusing by looking at PhD students from McGill, which, as it approaches its bicentennial, and in recognition of a changing job market, an Individual Development Program has been set in place to encourage PhD students to reflect on where they are going and develop skills needed for what they want to do – whether it’s inside the academy or outside.

Paul Yachnin is also the Tomlinson Professor of Shakespeare Studies in the Department of English at McGill University.

Picture credit: Paul Yachnin, director of the TRaCE project focused on gathering stories and data about life after (and during) a humanities PhD in Canadian universities.