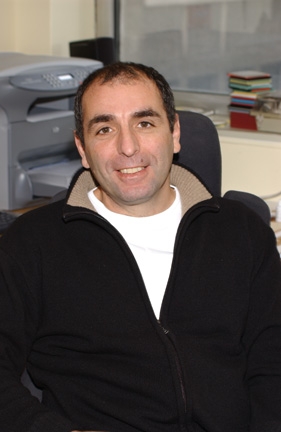 On the day that you read this, more than 400 Canadians on average will suffer a concussion or some other brain injury.

One in three of those injured will be a child or young person most likely participating in some sport or physical activity. Car accidents and falls are other common causes of brain injury. The risk is that many victims will not realize the seriousness of their injury and neglect to take steps to investigate it. Although public awareness of brain injuries is higher today than it was in the 1970s, athletes and the public at large still too often ignore warning signs.

Dr. Alain Ptito, a cognitive neuroscience researcher at The Neuro and Director of the McGill University Health Centre’s Psychology Department, is working to ensure that following a brain injury people receive both a diagnosis and, if necessary, proper treatment. He is investigating potential diagnostic tools that could provide objective data for evaluating the seriousness of a brain injury.

“More than half of the brain’s structures have some kind of visual component, so it’s not surprising that many people complain of visual problems after a concussion,” notes Dr. Ptito, who is scientific adviser for Saccade Analytics, a Montreal-based company that created a device for measuring how well someone’s eyes and head respond to basic tasks following a brain injury. The company was founded in 2016 by Dr. Mimi Galiana, a professor in McGill’s Biomedical Engineering Department who had designed models for analyzing eye and head coordination.

The device uses 3D googles like those worn in video games. The test takes only a few minutes. During the test, the person’s eyes and head follow targets. Data is uploaded and processed and a report is produced using key metrics that show how well different parts of the potentially injured brain dealt with the test’s challenges.

“The advantage of this device is that it’s portable,” says Dr. Ptito. “You can take it on the football field or to the ice rink and do the test right away and then compare results to baseline data. If the athlete shows signs of a concussion, there’s no question – they don’t go back to the game.”

Dr. Ptito sees the device as a complementary diagnostic tool, not as a stand-alone test.

“Although a lot of people have visual problems after a concussion, not everyone does, which doesn’t mean that they are not injured. If someone doesn’t show visual problems, you still have to examine them further to make sure that they’re all right.”

Dr. Ptito is also working on a research project in which university athletes would undergo a functional magnetic resonance imaging (fMRI) scan before and after a game. Data-gathering sensors inside the athlete’s helmet would permit comparison of impact forces that occurred during the game and signal a potential brain injury during the match.

“If an athlete gets a concussion and we’re unable to say whether they can return to play or not, they’re at risk of making their injury worse,” says Dr. Ptito. “We must find a way to use objective data to contribute to a recommendation of putting a player back in play or not. We want to see if there’s a correlation between the strength of an impact and the possibly altered activations that we see with the fMRI.”

In connection with his brain trauma studies, Dr. Ptito also continues to test an experimental method called the Portable Neuromodulation Stimulator or PoNS ™. This device sends electrical stimuli to the patient’s brain through the tongue, which is a very sensitive organ with an important representation in the brain. The stimuli reach the pons, a structure in the upper part of the brain stem that helps to control breathing, hearing, taste and balance. The pons also helps different parts of the brain to communicate. The hope is that by stimulating brain plasticity, problems related to brain injury like loss of balance might be solved or improved.

Dr. Ptito is in close discussion with renowned trauma specialist and MUHC surgeon, Dr. David Mulder, who serves as the doctor for the Montreal Canadiens hockey team. Dr. Ptito’s hope and goal would be to test the entire Canadiens team and other NHL teams before their competitive season begins so that baseline data would be available to compare with data derived from a player following a concussion.

In the meantime, Dr. Ptito is leading a charge to create a Concussion Clinic at The Neuro where staff would be trained in techniques to detect and to treat brain injuries.

Following a concussion, people can experience symptoms such as headaches, confusion, dizziness, dilated pupils, loss of balance, ringing noise, vomiting, slurring of speech, nausea, and tiredness. Some people suffer temporary amnesia and cannot even recall the event that caused the trauma.

Some symptoms might appear immediately or only a day or days after the trauma occurred. A person might feel irritable, more sensitive to noises and bright lights, have trouble sleeping or concentrating, feel depressed, or lose some of their ability to taste and smell.