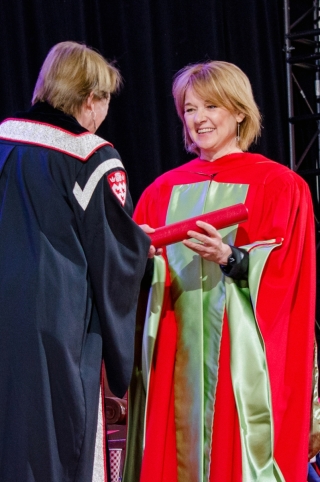 The Faculty of Law is pleased to announce that Professor Johanne Poirier (BCL’91, LLB’91) received the 2019 John W. Durnford Teaching Excellence Award at the Law Convocation ceremony on May 30, 2019. Professor Colleen Sheppard presented her. This award – named in honour of the late emeritus professor and former dean John W. Durnford (BCL’52) – annually recognizes the exceptional pedagogy of a law professor selected by students via the Law Students’ Association.

Professor Poirier joined the Faculty of Law in August 2015 as the inaugural holder of the Peter MacKell Chair in Federalism. She previously taught comparative law, federalism, and European regionalism at the Université libre de Bruxelles (ULB), and also co-directed the ULB’s Center for Public Law. Professor Poirier has been an invited professor at many universities, and she has participated in a number of expert missions on constitutional design in many countries. Prior to her academic career, she clerked for the Honorable Justice Charles Gonthier (BCL'51, LLD'90) of the Supreme Court of Canada, and was a constitutional lawyer for the Canadian Department of Justice.

“In their nomination letters, students highlighted Professor Poirier’s engagement, openness, and genuine care for her students’ success, as well as her exceptional ability to impart her passion for constitutional law,” said Dean Robert Leckey. “This award is a well-deserved recognition of Professor Poirier’s excellence in the classroom and her deep commitment to student learning and growth.”