The global ocean out of balance 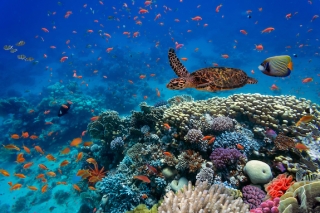 Surprising as it sounds, all life forms in the ocean, from small krill to large tuna, seem to obey a simple mathematical law that links an organism’s abundance to its body size. For example, although small krill are individually only one billionth of the weight of a large tuna, they also tend to be a billion times more numerous throughout the oceans. The idea, known as the Sheldon size spectrum theory, was first advanced in the 1970s, but has never been tested for a wide range of marine species and on a global scale until now. An international research team, including researchers from McGill, found that not only does the theory appear to have once held true, but that this natural balance has now been drastically altered by widespread industrial fishing.

In a study published today in Science Advances, an international team involving researchers from McGill University, the Max Planck Institute for Mathematics in the Sciences in Germany, the Institut de Ciència i Tecnologia Ambientals in Spain, Queensland University of Technology in Australia and the Weizmann Institute of Science in Israel have found that when oceans were in a more pristine state (before the 20th century and the advent of wide-scale industrial fishing) the size spectrum theory appears to have held true.

“The fact that marine life is evenly distributed across sizes is remarkable,” says Eric Galbraith, the senior author on the paper and a professor in McGill’s Department of Earth and Planetary Sciences. “We don’t understand why it would need to be this way – why couldn’t there be much more small things than large things? Or an ideal size that lies in the middle? In that sense, the results highlight how much we don’t understand about the ecosystem.”

To gain a picture of the current numbers of a wide range of species, the researchers used a range of recent studies to construct a large global data set of marine organisms, including bacteria, phytoplankton, zooplankton, fish, and mammals. Their approach allowed them to differentiate the spatial distribution of 12 major groups of aquatic life over the entire ocean.

“It was challenging to find a way to adequately compare measurements of organisms that span such a massive difference in scale,” recalls Ian Hatton, the first author of the study and an Alexander von Humboldt research fellow at the Max Planck Institute. “While microscopic aquatic organisms could be estimated from more than 200,000 water samples collected across the globe, larger marine animals can swim across whole ocean basins and needed to be estimated using entirely different methods.”

The researchers also used historical reconstructions and marine ecosystem models to estimate marine biomass in pristine oceans (pre-1850) and compared this data to the present-day. They found that, despite exceptions at either extreme – whales and bacteria - there was once a remarkably constant biomass of approximately 1 gigaton over each order of magnitude range of body size. This means that the total amount of life in the oceans between any size and a size ten-fold larger – for example, from 1 g to 10 g – always adds up to about 1 billion tons, regardless of the starting size. But industrial fishing has significantly altered this picture.

In contrast with a nearly constant biomass spectrum in the pristine ocean, the researchers’ examination of the spectrum revealed a major impact of humanity on the distribution of biomass across the largest sizes.

While fishing accounts for less than 3 percent of human food consumption, its effects on the biomass spectrum have been devastating. Large fish (meaning anything longer than 10 cm) have experienced a total biomass loss of roughly 2 Gigatons (a 60% reduction), dwarfing the 0.1 Gigatons that fishers catch every year. Historically, whaling was even more devastating for the largest end of the biomass spectrum, with the largest whales suffering a 90% loss. Indeed, the authors estimate that losses caused by industrial fishing and whaling over the past century are much greater than the potential biomass losses due to climate change scenarios over the next 80 years, even under pessimistic emissions scenarios.

“The biggest surprise, when viewed from this global perspective, was the huge inefficiency of fishing. When industrial fishing fleets go out and catch fish in the ocean, they aren’t acting like the large predatory fish, seals, or birds that they compete with, that just consume small quantities of the fish populations in a way that keeps the populations stable,” says Galbraith. “Humans have not merely replaced oceanic top-predators, but entirely altered the flow of energy throughout the marine ecosystem.”

He adds: “The good news is that we can reverse the imbalance we’ve created, by reducing the number of active fishing vessels around the world. Reducing overfishing will also help make fisheries more profitable and sustainable – it’s a potential win-win, if we can get our act together."