François Crépeau appointed to the Order of Canada 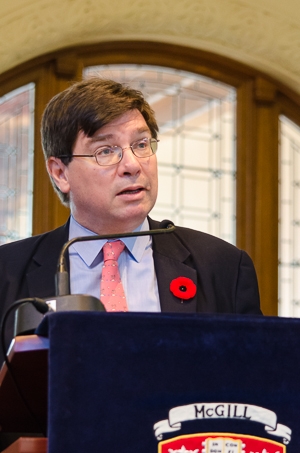 The Faculty of Law is pleased to share the news that Professor François Crépeau was appointed Officer of the Order of Canada by Governor General Julie Payette on December 29, 2017. Professor Crépeau, who was honoured for “his research and contributions to international law and for his efforts to promote civil rights, particularly with respect to refugees,” joins the prestigious roster of McGill Law community members appointed to the Order of Canada.

Created in 1967, the Order of Canada, one of our country’s highest civilian honours, recognizes outstanding achievement, dedication to the community and service to the nation. Close to 7 000 people from all sectors of society have been invested into the Order for having enriched the lives of others and taken to heart the motto of the Order: DESIDERANTES MELIOREM PATRIAM (“They desire a better country”).

Professor François Crépeau, O.C., F.R.S.C., Ad. E., is the Director of McGill’s Center for Human Rights and Legal Pluralism, and holds the Hans and Tamar Oppenheimer Chair in Public International Law. His current research includes migration control mechanisms, and the rights of foreigners. He recently completed a five-year appointment as United Nations Special Rapporteur on the Human Rights of Migrants. He is a fellow of the Royal Society of Canada, and he was a Fellow of the Pierre Elliott Trudeau Foundation from 2008 to 2011. Having been appointed International Francqui Professor Chair in Social Sciences for the year 2017-2018, Professor Crépeau will be spending the first half of 2018 in Belgium.

Professor Crépeau and other recipients will be invited to accept their insignia at a ceremony to be held at a later date. The full list of appointments to the Order of Canada is available on the Governor General of Canada's website.