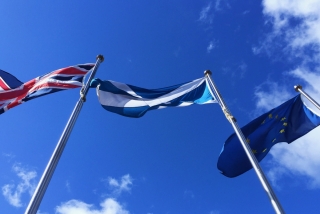 The Scottish National Party is promising to hold a second independence referendum after election results announced Saturday saw pro-independence candidates gain a majority in the Scottish parliament. In her victory speech, Scottish First Minister Nicola Sturgeon said her party, which wants to break away from the United Kingdom, had delivered a "historic and extraordinary" win after finishing with 64 seats in the Scottish parliament, one short of a majority. (CNN)

“The one thing that the UK and Scottish governments can agree upon is that there won't be a referendum until after the COVID-19 crisis has been settled. This gives both sides time to negotiate a compromise.”

“The triumph of the Scottish Nationalist Party in the latest elections suggest that a new referendum is likely. However, though there may be pressure, interests in Scotland as much as in Westminster make this outcome unlikely.”

John A. Hall is an Emeritus James McGill Professor in the Department of Sociology and currently a Visiting Professor in the School of Social and Political Science at the University of Edinburgh. A world-renowned historical and macro-sociologist, his research focuses on market ideologies, state theories, nationalism and globalism.

“While Scotland might be heading towards a second independence referendum is less than a decade, support for sovereignty in Quebec remains comparatively low and the traditional vehicle for the cause, the Parti Québécois, is facing a clear decline. Although it could certainly boost the morale of sovereigntists, a successful independence referendum in Scotland would be unlikely to have a meaningful impact on the political situation in Quebec.”

“The political and constitutional relevance of the Scottish election for Quebec and Canada is limited. Politically, parties advocating for Scottish independence are on the ascendant, whereas in Quebec they now represent somewhere on the order of 25-30% of the electorate, and a much smaller proportion of the seats in the National Assembly. There has not in recent years in the Canadian context been the kind of blockbuster political event of the magnitude of Brexit that might trigger a political resurgence of the independence option. Constitutionally, the Secession Reference creates a framework in Canada within which the question of secession is to be handled, whereas part of what is at stake in Scotland right now is precisely that the right of Scots to determine their constitutional future be recognized, that the exercise of that right not be determined exclusively by London. All that being said, there is no predicting the impact that an eventual successful Scottish referendum might have on public opinion in Quebec. Despite the obvious differences, it may very well, if it were to happen, capture the imagination of many Quebecers.”