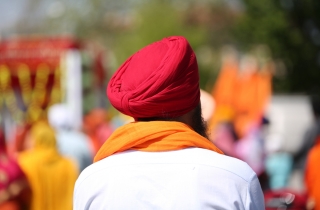 NDP Leader Jagmeet Singh has emerged as the most likable of the federal party leaders as Liberal Leader Justin Trudeau’s popularity sinks amid the election campaign, a new poll suggests. The Ipsos poll conducted exclusively for Global News found Singh was the only party leader who was viewed more positively than negatively, with 45 per cent approval versus 39 per cent disapproval among those surveyed. (Global News)

“We might assume that Jagmeet Singh’s popularity is coming from the Sikh-Canadian community. However, with the NDP’s unsuccessful run in 2019, as well as anecdotal knowledge, it leads me to conclude that the Sikh community’s voting patterns vary based on characteristics ranging from socioeconomic status to country of birth and province/territory of residence, as well as other historical and generational factors. Additionally, given the record number of Sikh-Canadian MPs who were elected from the Liberal Party in 2015, it is clear that party affiliation and community mobilization are also significant factors. Thus, rather than boiling Singh’s recent popularity down to racial or ethnic affinity voting, there is perhaps an overarching shift in the Canadian political landscape that should be researched once the 44th parliament is formed.”