Dr. Allison Gonsalves Speaks Out About the Polytechnique Massacre 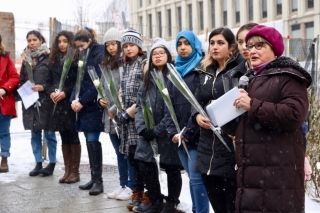 The Department of Integrated Studies in Education's Dr. Allison Gonsalves was asked to speak at McGill's December 6th event honouring the memory of the victims of the Polytechnique Massacre; the 30th anniversary of the tragedy and the National Day of Remembrance and Action on Violence Against Women. Dr. Gonsalves was there in her capacity as the Co-Chair for McGill's Senate Subcommittee on Women. The event was covered by the McGill Reporter. Here is a copy of her speech, for those who were unable to attend the tribute event:

The McGill Senate Subcommittee on Women represents the interests of women students, faculty and staff at McGill University. Each year, on December 6th, we commemorate the lives of 14 women who were killed because they were women. This year, on the 30th anniversary of the anti-feminist attack at École Polytechnique, the Senate Subcommittee on Women invites the McGill and Montreal community to reflect on the reality that violence against women continues to be a part of our present.

Canada is still not a safe country for all women who live here, with women more likely than men to experience violence sometime in their lives, usually before they are 25. For some women, those most marginalized, these risks are even greater. Societal and structural policies and programs continue especially to harm single mothers, women with disabilities, trans women, Indigenous women, immigrant, refugee, and racialized women.

We call upon our communities to recommit to ensuring the deaths at École Polytechnique were not in vain. As we mourn these deaths, as well as the many women and girls murdered or abused since then, we need to continue to work for gender equality, for policies that lead to gender equity, and an end to structural and individual violence against all people who face gender-based oppression.

(Photo courtesy of the McGill Reporter.)