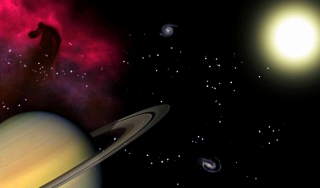 Deep space travel may soon be within reach, but challenges remain. Among them, what will astronauts eat on missions that last for years and that extend far from Earth? Two student-led teams under the McGill Advanced bio-Regenerative Toolkit for Long Excursion Trips (MARTLET) umbrella have been selected as semifinalists of the Deep Space Food Challenge (DSFC), a joint initiative of NASA, the Canadian Space Agency (CSA), and Impact Canada. Ten Canadian teams were selected by the DSFC jury in Phase 1 of the Challenge.

Among the largest teams competing in the DSFC, MARTLET, supervised by Dr Mark Lefsrud, Associate Professor of Bioresource Engineering, has engaged over 100 students, and successfully submitted six design proposals to the competition. Lefsrud looks to the students to chart the course. “MARTLET is very much a student-led initiative, and the student leaders of the two semifinalist teams are working hard to solve deep space’s challenges,” he says. “The students are not hindered by any preconceived ideas of how to do things.”

Though the teams are thinking outside the box in developing their innovations, food production systems must meet strict criteria. For example, the proposed technologies must be less than 2 cubic meters in volume, pass through a doorway that is 1.07 m wide and 1.90 m tall, consume as little water as possible, and less than 3000 watts of power – no more than what it takes to operate the average laundry dryer. The technologies should produce about 10 per cent of an astronaut’s daily nutritional needs for a crew of four astronauts. Applicants were also asked to consider how their innovations could apply to terrestrial environments experiencing food security issues.

Among the semi-finalist projects is MARTLET’s first-of-its-kind controlled environment to breed and harvest crickets suitable for human consumption. Starting with nothing but a few hundred eggs, the team anticipates that the CRCTS will quickly support the growth of tens of thousands of crickets every month. Using advanced filters, UVC lamps, and vacuum systems to completely isolate the crickets from the human living environment, CRCTS proposes a means of sustainable cricket husbandry that will also minimize contamination risk to the spacecraft. CRCTS plans to work with industry partner, U Technology Corporation Lighting, which provides lighting hardware supply and design guidance.

“Cricket harvesting has been going on for millennia, in many areas around the world, so that's not an innovation in itself” says Becker. “The innovation is bringing it down to a controlled environment and applying that to space travel, and to more remote communities in Northern Canada.”

Crickets convert feed to edible products at rates far exceeding those of typical protein-producing livestock, such as cattle. According to a 2013 report of the Food and Agriculture Organization of the United Nations, raising crickets for food is more than 12 times more resource-efficient than raising cattle. MARTLET anticipates that the CRCTS should eliminate food waste by harvesting crickets prior to the development of the insects’ chitin-rich exoskeleton, which may be indigestible to many humans. The technology produces a finely-ground powder that is stored safely and aseptically within the system itself. When combined with water to form a paste, cricket powder is a versatile, and appetizing, ingredient. CRCTS team members have taste-tested the edible cricket protein. “We were actually surprised that it was as tasty as it was,” says Becker.

MARTLET’s second semi-finalist project, the InSpira Photobioreactor (PBR) promises to transform spirulina—a blue-green algae commonly available as a dietary supplement at health food stores—into an edible gel and drink. The produce can be consumed as-is or used as a flavouring and dietary supplement when combined with other food products. The proposed technology is a unique, cartridge-based photobioreactor, coupled with an in-house harvesting, dewatering, and processing unit to transform the culture into edible forms.

Spirulina packs a nutritional punch but the secondary benefits of cultivating it may help astronauts manage the mental and emotional toll of deep space travel. “Having living things that you can take care of in space has its own benefits for mental health, as does providing a pleasant and nostalgic eating experience for astronauts,” says Guan. “As you need to consume so little of the spirulina to gain the nutritional benefit, you can customize the taste,” she adds. “Our team’s food scientists collaborated with an innovative company here in Canada, FlavorCAN, to find several flavour profiles that felt timeless and therefore, easy to consume on a regular basis.”

By design, the astronauts can adjust production to meet their nutritional needs over time. Guan hopes this feature will make a difference in remote areas where green food production is limited or inaccessible. “Getting fresh fruits and vegetables to Arctic regions is incredibly expensive,” she says. “A spirulina photobioreactor continuously producing something fresh that can provide a supplement of vitamin B12 to the diet would be valuable.”

Catherine Maggiori microbiology doctoral student, project manager of MARTLET and former team member of InSpira PBR, believes the strength of the two semi-finalist projects is due to the multi-faceted and diverse applications of the technologies. “Both projects were able to innovate, presenting their food product in different forms,” she says. “The potential to prepare the foods in different ways will hopefully reduce boredom in space travel. We envision bonding time for the crew in the food preparation.”

Lefsrud also believes that by mastering novel means of food production, astronauts will harness the self-reliance necessary to survive in Martian or lunar environments. “For the longer-duration missions, you have to become a farmer,” he says.

For the teams working to get them to their destinations, the journey has demonstrated the power of student-driven design. Hader notes that MARTLET won out over stiff competition, including applications from large corporations, for-profits, and not-for-profits alike. “We have cemented universities’ role in both space and food technology innovation,” he says.