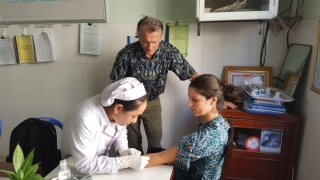 Several new medicines have been found to be more effective than traditional ones used to treat multidrug-resistant tuberculosis (MDR-TB), according to a new international collaborative study led by Dr. Dick Menzies, senior scientist at the Research Institute of the McGill University Health Centre (RI-MUHC) in Montreal. These findings precipitated a complete overhaul of worldwide TB treatment guidelines, with the results of this work published today in the British medical journal The Lancet.

Approximately 600,000 cases of MDR-TB emerge each year, claiming 240,000 lives. Diagnosis and treatment remains a major challenge with only one in four affected patients being diagnosed and even fewer being treated successfully.Present treatment practices of MDR-TB employ expensive, antiquated drugs that lead to toxic side effects such as constant nausea, hearing loss and renal failure.

Dr. Menzies, who is also a respirologist at the MUHC, and his colleagues combined the data of over 12,000 patients suffering with MDR-TB from 50 studies conducted in 25 countries. By compiling such a large amount of data, researchers were able to determine that new TB drugs such as bedaquiline, linezolid, and the later generation fluoroquinolones achieve excellent results in the treatment of MDR-TB, demonstrating consistently better cure rates and reduced mortality compared to currently used treatments. These new drugs were also effective in treating XDR-TB (extensively drug-resistant TB). In addition, the study showed that daily injections for treating MDR-TB may no longer be necessary (except in the most serious of cases).

The World Health Organization (WHO) has already responded to this study’s findings by announcing landmark changes in line with this MDR-TB regimen and, also, positioning fully oral regimens over injectable agents.

“The guidelines committee simply erased the old treatment recommendations and started over. They gave the treatment guidelines a complete make-over,” says Dr. Menzies, who is a senior scientist from the Translational Research in Respiratory Diseases Program of the RI-MUHC and a professor of Medicine, and of Epidemiology and Biostatistics at McGill University.

A committee responsible for making recommendations about treatment of MDR-TB with representatives of the American Thoracic Society (ATS), Centres for Disease Control and Prevention (CDC), European Respiratory Society (ERS), and Infectious Disease Society of America (IDSA) have also considered this new information.

“Although these guidelines are not yet finalized, I believe this committee will make similar wholesale changes to the way MDR-TB is treated. Given that each of these new drugs may increase cure rates by as much as 10 per cent, we hope that the new combinations will result in cure rates of up to 90 per cent – which would be extraordinary,” says Dr. Menzies, who just last month released a game-changing study on Latent TB treatment in the New England Journal of Medicine.

“The results confirm what TB clinicians around the world are seeing with their own eyes,” commented Dr. Paul Farmer of the Department of Global Health and Social Medicine at Harvard University.“It’s our hope that after 20 years of recommending these toxic regimens (…) we can finally turn to new and safer therapies based on demonstrably safer and better tolerated drugs.”

Tuberculosis is among the top 10 causes of worldwide deaths and the leading global infectious disease killer.

The study ‘Treatment correlates of successful outcomes in pulmonary multidrug-resistant tuberculosis: an individual patient data meta-analysis’ was authored by The Collaborative Group for the Meta-Analysis of Individual Patient Data in MDR-TB treatment–2017.

Partial support for this work was provided by the American Thoracic Society, Infectious Disease Society of America, European Respiratory Society, and US Centers for Disease Control and Prevention. Additional funding support was provided by Canadian Institutes of Health Research (Foundation grant 143350).

The Research Institute of the McGill University Health Centre (RI-MUHC) is a world-renowned biomedical and healthcare research centre. The Institute, which is affiliated with the Faculty of Medicine of McGill University, is the research arm of the McGill University Health Centre (MUHC) – an academic health centre located in Montreal, Canada, that has a mandate to focus on complex care within its community. The RI-MUHC supports over 420 researchers and close to 1,200 research trainees devoted to a broad spectrum of fundamental, clinical and health outcomes research at the Glen and the Montreal General Hospital sites of the MUHC. Its research facilities offer a dynamic multidisciplinary environment that fosters collaboration and leverages discovery aimed at improving the health of individual patients across their lifespan. The RI-MUHC is supported in part by the Fonds de recherche du Québec – Santé (FRQS).