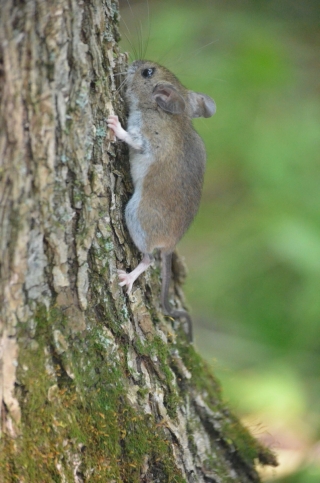 New research by McGill University biologists shows that milder winters have led to physical alterations in two species of mice in southern Quebec in the past 50 years – providing a textbook example of the consequences of climate change for small mammals.

The findings also reveal a stark reversal in the proportions of the two mice populations present in the area, adding to evidence that warming temperatures are driving wildlife north.

At McGill’s Gault Nature Reserve, about 40 kilometres east of Montreal in the St. Lawrence valley, biologist Virginie Millien for the past 10 years has been studying two similar, coexisting species: the deer mouse and the white-footed mouse. Both are common in eastern North America. But while the deer mouse can be found in Canada’s northern reaches, the white-footed mouse is a more southerly species, rarely found north of the St Lawrence River.

By comparing data from the past decade with specimens collected by McGill researchers as far back as the 1950s, Millien’s team discovered that the skull shapes of both mouse species have changed over time. The changes in the two species paralleled each other, but have been more pronounced in the white-footed mouse -- with the result that the cranial shapes of the two species have become more distinct.

At the same time, the white-footed mouse has been moving farther north as winters get milder – at a rate of around 11 kilometres a year, the researchers estimate. While nine of 10 specimens caught in the reserve by researchers in the 1970s were deer mice and only 10% were white-footed, those proportions are now reversed, according to findings by Millien’s team, published recently in the journal Evolutionary Ecology.

“Evolutionary theory predicts morphological changes in response to climate warming, but there is very little evidence for it so far in mammals,” Millien says.

These changes may be related to a dietary shift caused by climate change, combined with competition for food resources between the two species of mice, according to the researchers. A shift in the position of a molar tooth in both species, for example, could reflect changes in the type of food that the mice need to chew.

One question that remains to be settled is whether the changes are genetic, and will be passed on to future generations – actual evolution -- or whether they represent “plasticity,” the capacity of some species to adjust to rapid environmental change.

In either case, the physical changes – although difficult for untrained observers to discern - are significant. “We are talking about bones and teeth, hard structures that are not easy to bend,” Millien notes.

The findings add to the few documented cases of rapid responses by wildlife to climate change, such as Rosemary and Peter Grant’s studies of finches in the Galapagos archipelago for four decades starting in 1973. By careful measurements of the population of two species on one tiny island over the course of major weather changes such as El Niño events and droughts, the Grants were able to show that evolutionary changes in beak size and body size can occur in as little as a couple of years.

For Millien, the old-growth forest of the Gault Nature Reserve on Mont Saint Hilaire in Quebec’s Monteregie area similarly provided a kind of insulated, open-air lab. “When I arrived in Quebec from France 15 years ago, I was working on the evolution of island mammals,” she recalls. “I was pretty disappointed, because there was little opportunity to find islands close to Montreal. Then I saw a picture of the Monteregian hills taken by NASA in the winter: these were islands of forest within a matrix of agricultural field and urban areas. I had found my study system.”

What made these wooded hills particularly special was that Millien also had access to museum specimens from the same locations, collected in the 1950s through a McGill field survey, and in the 1970s by Peter Grant, who did some work on small mammals at Gault while he was a biology professor at McGill. (He and Rosemary Grant are now emeritus professors at Princeton University.)

With its 1,000 hectares of old-growth forest, “Gault is unique” in southern Quebec, says Millien, who has also been director of the reserve since last year. “It provides an opportunity for researchers to study the effects of climate change, putting aside the added disturbance of human activities. One of our colleagues in Biology is working on developing a project similar to ours, revisiting some plant surveys that were done decades ago.”