Changes at the Helms of Three Research Centres 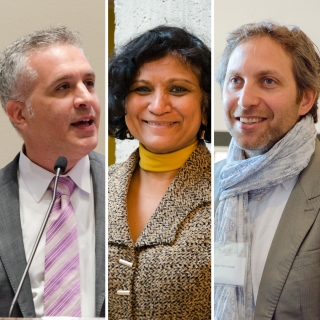 “Our research centres play a critical role in the intellectual life of the Faculty of Law and in connecting us to outside communities,” said Dean Robert Leckey. “The expertise and leadership of the colleagues stepping into leadership roles will continue to enhance the Faculty’s role in advancing debates and ideas in several fields of law, policy, and society. We are grateful to Professors Moyse, Forray, and Crépeau for their numerous contributions during their respective terms as director.”

Richard Gold is a James McGill Professor at the Faculty of Law, where he has taught since 2001. Professor Gold’s research focuses mainly on the life sciences and the nexus between innovation, development, and commerce. An expert in intellectual property and the founding director of the CIPP in 2003, Professor Gold has provided advice to many organizations, including Health Canada, Industry Canada, the Canadian Biotechnology Advisory Committee, the Ontario Ministry of Health and Long-Term Care, the Organization for Economic Cooperation and Development, the World Health Organization, the World Intellectual Property Organization, and UNITAID.

Mark Antaki is an associate professor at the Faculty of Law, which he joined in 2002 as a Boulton Fellow. Professor Antaki holds a BCL and LLB from McGill (‘96) and a PhD in Jurisprudence and Social Policy from the University of California, Berkeley. His research focuses on public law and international law, political and legal theory, and the history of ideas. He is a co-editor of and contributor to Sensing the Nation's Law - Historical Inquiries into the Aesthetics of Democratic Legitimacy (Springer, 2018).

Nandini Ramanujam is a full professor (professional) and has been serving the Centre for Human Rights and Legal Pluralism as executive director and director of programs. She is a member of the Steering Committee of the Scholars at Risk Network, Canada section. Her research and teaching interests include Law and Development, Institutions and Governance, Economic Justice, Food Security and Food Safety, the role of civil society and the Fourth Estate (Media) in promotion of the rule of law, as well as the exploration of interconnections between field-based human rights work and theoretical discourses.