In fields ranging from robotics to cell biology, 21 projects are funded through the John R. Evans Leaders Fund (JELF) for innovative tools and infrastructure 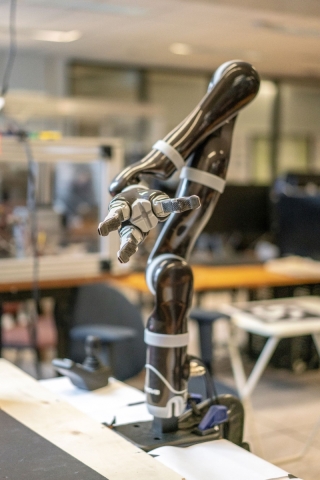 McGill’s researchers will soon acquire the highly specialized tools they need to innovate in their fields thanks to funding from the Government of Canada through the Canada Foundation for Innovation (CFI)’s John R. Evans Leaders Fund (JELF). The Honourable François-Philippe Champagne, Minister of Innovation, Science and Industry, made the announcement today of $77 million across 50 institutions in Canada through the program. In total, twenty-one McGill research projects have received a combined $3.9 million in federal grants through three rounds of JELF. McGill recipients will also receive additional funds from the provincial government and the university toward the total project budget for their research endeavors.

“Every profession requires the best tools and systems to improve outcomes, and research is no exception,” says Martha Crago, Vice-Principal (Research and Innovation). “McGill’s researchers are working on highly innovative solutions across the research spectrum: in healthcare, for the environment and with industry. Thanks to the new technologies and infrastructure acquired through the JELF program, McGill’s expertise will be augmented, and new possibilities generated for the benefit of all Canadians.”

The cobots are coming!

Thanks to the JELF investment, Professor of Electrical and Computer Engineering, AJung Moon, will welcome a humanoid—an autonomous mobile robot—to the McGill Responsible Autonomy & Intelligent System Ethics (RAISE) lab. Her research group will also acquire an integrated digital projector, RGB-D sensor, and a motion capture system as well as an additional 7-DOF robotic arm. RAISE lab will use these new tools to investigates the impact of interactive or collaborative robots (cobots) on individuals and society. “Collaborative robotics is one of the fastest-growing sub-sectors of robotics today, and it offers a promising long-term investment for Canada's economy”, says Moon. “However, robot influence on humans can be pre-programmed, one-sided, and deployed at scale. This can expose us to new types of harm, such as systematic manipulation of our actions and decisions. This research will help establish empirically-grounded guidelines to ensure responsible design and deployment of collaborative robotic systems in Canada and abroad.”

Plants in the fight against climate change

With the investment from the CFI, biology professor Fiona Soper’s lab will gain three unique tools to help quantify the contributions of plants in controlling the effects of climate change. The new acquisitions include the Acetylene Reduction Assay by Cavity ring-down laser Absorption Spectroscopy (ARACAS) system—one of the first of its kind in Canada—which will measure nitrogen fixation in tropical plants, one of the most essential processes for the health and productivity of whole ecosystems. This infrastructure will be complemented by a portable photosynthesis system, as well as a multi-mode microplate-reader. These versatile instruments can be used to complete greenhouse growth chamber-based experiments, to analyze plant samples collected in the field, and to conduct in situ measurements in tropical ecosystems. The funding will also upgrade existing greenhouse lighting infrastructure in the McGill Phytotron that also houses Co2 -controlled growth chambers central to Soper’s research.

Solving the mysteries of mitosis

McGill will also acquire a new state-of-the-art microscopy system, which Professor Jackie Vogel will use to advance understanding on the causes of cancer and birth defects. Vogel’s lab studies key events early in cell division (mitosis). While mitosis has been studied for hundreds of years, most of the research has focused on the last stage of the process, when the cell cleaves to form two identical cells. The earliest events in cell division remain relatively mysterious. With this new microscope, Vogel will be able to detect the fast movement of molecules within living cells and distinguish molecules that are very close together without damaging the cell with the phototoxic effects of intense light.