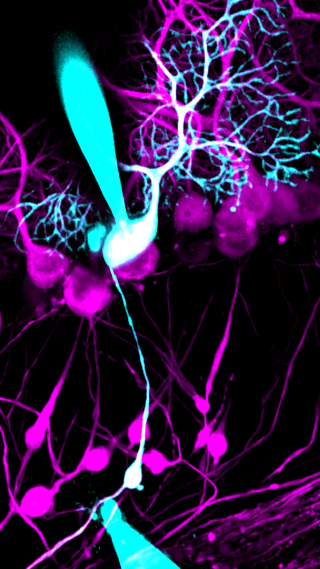 Researchers at McGill University have shown that a brain cell structure previously thought to be pathological in fact enhances cells’ ability to transmit information and correlates with better learning on certain tasks.

In a study published in Nature Communications, the team investigated swellings that occur in the axons of Purkinje cells in the cerebellum. In results that contradict established expectations, they found that axons with swellings did a better job of conducting electrical signals than those without.

“These are the kind of results where you really scratch your head and think, ‘Let’s check that again’,” says senior author Alanna Watt, an Associate Professor in the Department of Biology. “We really thought when we started this that we were going to characterize and measure how an axon fails – and that’s not at all what we saw.”

Swellings in axons – the long, slender fibres through which nerve cells transmit information to other cells – are observed in normal development and in disease. Increased numbers of axonal swellings are seen in various neurodegenerative disorders, which has led scientists to believe swellings have a negative impact on axon function. While computer modelling lends some support to this view, the McGill research team was the first to test the theory with measurements on actual nerve cells.

Using a technically challenging combination of two-photon microscopy and electrophysiology to measure electrical activity simultaneously at different locations within cells, the researchers demonstrated that the presence of axonal swellings in mouse Purkinje cells had no detrimental impact on the rate at which those cells produced signals (the firing rate) or on the speed at which axons transmitted the signals. Remarkably, the experiments also showed that at peak firing rates axons with swellings were less likely to fail than those without.

In a surprising twist, the McGill researchers found that they were able to stimulate the formation of axonal swellings by introducing a pharmaceutical that blocked the transmission of electrical signals in nerve cells, especially in the axons. Seeing axonal swellings form within a matter of hours when the axon of a nerve cell had been compromised in this way challenges previous assumptions about the role of axonal swellings in neurodegenerative disorders. As Watt explains, the discovery leaves room for the possibility that swellings represent a self-repair mechanism rather than a deterioration caused by disease.

“Transmitting information by way of electrical signals is the most important thing that an axon does,” she says. “If it starts to fail at that job, it makes sense that there’s a mechanism that tries to prevent that.”

In addition to their investigations at the cellular level, the researchers sought to determine the impact of axonal swellings on overall brain function. The team used three tests designed to assess motor learning and coordination, which are among the cerebellum’s most important roles. Supported by modelling to account for the natural variation between individual learning abilities, the results revealed a positive correlation between the abundance of axonal swellings in cerebellar Purkinje cells and motor learning abilities.

“We think the link is probably an indirect one,” Watt explains. “The learning is probably happening somewhere else, but the information is being relayed more reliably and therefore we see an improvement.”