Bat-winged dinosaurs that could glide 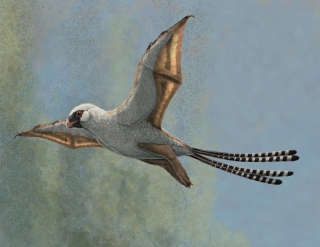 Despite having bat-like wings, two small dinosaurs, Yi and Ambopteryx, struggled to fly, only managing to glide clumsily between the trees where they lived, according to a new study led by an international team of researchers, including McGill University Professor Hans Larsson. Unable to compete with other tree-dwelling dinosaurs and early birds, they went extinct after just a few million years. The findings, published in iScience, support that dinosaurs evolved flight in several different ways before modern birds evolved.

“We know some dinosaurs could fly before they evolved into birds,” says Professor Larsson, Director of McGill’s Redpath Museum. “What this shows us is that at least one lineage of dinosaurs experimented with a completely different mode of aerial locomotion. Gliding evolved countless times in arboreal amphibians, mammals, lizards, and even snakes – and now we have an example of dinosaurs.”

Yi and Ambopteryx were small animals from the Late Jurassic of China, living about 160 million years ago. Weighing in at about half a kilogram, they are unusual theropod dinosaurs. Theropods are carnivorous dinosaurs that include all birds alive today. Most theropods were ground-loving carnivores, but Yi and Ambopteryx were at home in the trees and lived on a diet of insects, seeds, and plants.

“Once birds got into the air, these two species were so poorly capable of being in the air that they just got squeezed out,” says lead author Thomas Dececchi, an assistant professor of biology at Mount Marty University. “Maybe you can survive a few million years underperforming, but you have predators from the top, competition from the bottom, and even some small mammals adding into that, squeezing them out until they disappeared.”

Little creatures could glide, not fly

Curious about how these animals could have flown, the researchers, scanned fossils using Laser-Stimulated Fluorescence (LSF), a technique that uses laser light to pick up soft tissue details of their wing membranes that can’t be seen with standard white light. Later, the team used mathematical models to predict how they might have flown, testing different variables like weight, wingspan, wing shape, and muscle placement.

“The results are clear these animals were not able to fly like birds,” says Larsson. “They didn’t have adaptations to even get close to the physical thresholds for powered flight, but their weird membranous wings do give them enough of an aerofoil to have glided. They are not comparable to living gliding squirrels or lizards but seem to have come up with a really novel way of getting a large enough wing membrane.”

Although gliding is not an efficient form of flight since it can only be done if the animal has already climbed to a high point, it probably did help Yi and Ambopteryx stay out of danger while they were still alive.

“Living gliders don’t travel long distances through the air,” says Dececchi. “It’s not efficient, but it can be used as an escape hatch. It’s not a great thing to do, but sometimes it’s a choice between losing a bit of energy and being eaten. Once they were put under pressure, they just lost their space. They couldn’t win on the ground. They couldn’t win in the air. They were done.”

The researchers are now looking more closely at the musculoskeletal anatomy of these bat-winged and other feathered dinosaurs that evolved around the origin of birds. “The diversity of dinosaurs just before the origin of birds amazes me,” Larsson says. “We used to think of birds evolving as a linear trend from their ground-dwelling dinosaur ancestry. We can know revise this textbook scenario to one that had an explosive diversity of experimentation, with dinosaurs evolving powered flight several times independently from birds, many having fully feathered wings but with bodies too heavy or wings too small to have gotten off the ground, and now, a weird bat-winged group of dinosaurs that were not only the first arboreal dinosaurs, but ones that glided! I feel like we are still just scratching the surface.”