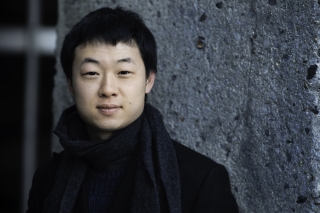 Congratulations to Zhuosheng Jin (current DMus), winner of the 2020-2021 Luba Zuk Piano Duo Composition Prize! Zhuosheng’s composition is slated to premiere at the Schulich School of Music in 2022.

Studying composition with Philippe Leroux, he reflects the kind of creativity and exploration that fuels the composition area.

An accomplished composer, we asked Zhuosheng some questions to peek inside his brain and get some insight into his compositional style and what we might expect to see — and hear — in the future. He shares about home, how inspiration strikes, and what can help drive you forward.

Where do you call home?

Zhuosheng Jin: I used to use a Westernised name, Joseph, for a short period during my undergraduate degree, for its similar pronunciation to my “real” name, Zhuosheng. Here in North America, not many people can perfectly pronounce “Zhuosheng”, so I thought Joseph would be an easier name for them to use. And then, one day, I saw it, Joseph, printed out somewhere, a programme or such, and it took me a long time to realise that it’s me, and that I realised that it will never be me. After that, I never used that name, Joseph, again.

Where do I call home? I was born in East Asia and took my higher education in North America: first the US, and then Canada. I do not know where, or actually in many cases, which side, I belong to, and often it makes me feel confused.

I think I’m a human being living on earth. Wherever I go, I hope people in that place will treat me like I’m at home.

Is there a moment that brought you to now, studying composition — one that changed your course or confirmed it?

ZJ: In China we have middle and high schools directly affiliated with conservatories. I entered one at age 13, majoring in piano. There were 10 other kids my age majoring in piano and my mom, like many other parents around, wanted me to be the best in every semester’s exams. It was impossible because I didn’t want to compete and I didn’t want to live under such pressure. But I wanted to stay in the school, so I decided to change to a major with fewer students, which ended up being composition. At the time, I didn’t realize that I could go this far. It was an amazing journey and I hope to continue it.

What is your favourite aspect of composition?

ZJ: You don’t have to bring your instrument or look for practice rooms all the time when traveling. Also, as an outdoorsman I am sometimes out for several days or even weeks at a time. For an instrumentalist, you have to practice every day, but for me, it’s okay. Composers do not need this kind of muscle memory. We have other ways to keep up.

How would you briefly describe your compositional style?

ZJ: I am interested in relationships between texture and sound. The texture is like lines or shapes in visual art, and sound, the colour. I want to find a unique way to allow these two elements in my music to somehow merge, in a way that is refreshing for the audience.

Any advice to future composers out there?

ZJ: Don’t be afraid to ask questions. Most of the time it is the question, not the answer, driving you forward. Also, don’t be hasty to shout an answer out. Wait a bit, think, dig deeper, suspect, and then your response and treatment will be more convincing.

What do you envision the listener will hear while listening to your composition?

ZJ: I think every piece, when composed, has its own life. Every listener has their own relationship to a piece. As the composer, I do not interfere in this relationship. This question reminds me an interesting story. I wrote an ensemble piece, precoda, in 2015 and it was about an unreachable home, a home which by definition exists only when one is homeless. It was a somewhat sad piece. After its premiere in Beijing, a boy around 12 or 13 came to me and said, “Mr. Jin, I heard the UFO flying by, I heard its sound! Your piece was amazing!” I laughed and felt relieved. I love this boy and his feedback — he was an excellent listener.

What do you envision for your commissioned work?

ZJ: Not anything specific, but it will be a piece of music reflecting my life experience here in Canada, and how my own cultural roots impact the local culture in Montreal. Also, I’ll be graduating next year from McGill, so it will be one of my last projects as a student. I anticipate it being a deeply emotional project for me.

Having begun piano studies at the age of seven and composition at thirteen, Jin holds degrees from Oberlin College (BMus’15) and Boston University (MMus’17). He is currently a DMus fellow at the Schulich School of Music of McGill University, studying with Philippe Leroux. He also followed private lessons and masterclasses with Helmut Lachenmann, Beat Furrer, Pierluigi Billone, and Stefano Gervasoni, among others.

The Luba Zuk Piano Duo Composition Prize was established in 2016 by Luba Zuk, LMus 1957, long-time professor of piano at McGill University and member of the Luba and Ireneus Zuk Piano Duo recognized for commissioning and performing new works, especially by Canadian and Ukrainian composers. The Prize is awarded annually to an outstanding undergraduate or graduate student in composition in the School for the completion of a work for piano duo. Preference will be given to a work that includes references to Ukrainian or Canadian culture, landscape, history or experience. Prize value: $2,000.