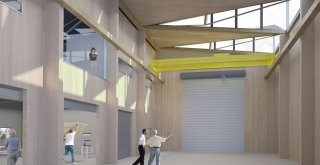 Today, Élisabeth Brière, Member of Parliament for Sherbrooke and Parliamentary Secretary to the Minister of Economic Development and Official Languages announced funding results from the Canadian Foundation for Innovation’s (CFI) Innovation Fund (IF) for universities in Quebec.

This announcement echoes the announcement on March 3 made by the Right Honourable Prime Minister of Canada, Justin Trudeau, of more than $518 million in research infrastructure support through the CFI. The funding will go to 102 projects at 35 post-secondary institutions and research hospitals across the country and will help Canada remain at the forefront of exploration, innovation and discovery.

“These investments from the CFI and the Government of Québec will ensure that McGill’s researchers have the tools they need to produce high-impact research that is of benefit to Quebec, Canada, as well as the world”, said Martha Crago, Vice-Principal (Research and Innovation). “Innovation happens through interdisciplinary and inter-institutional collaborations such as these nine outstanding CFI-funded projects. We also congratulate the researchers from McGill who are contributing their expertise to CFI-funded research projects across Canada.”

Timeless architecture for a sustainable future

Buildings contribute to an estimated 39% of global carbon emissions not only though direct energy use, but also through the energy intensive processes used to produce construction materials such as steel, cement and glass. Alternatively, forests are natural carbon sinks, absorbing and storing atmospheric carbon.

With the goal of producing long-lived and resilient architecture, the team will explore ways to “decarbonize” buildings and environments by making them less carbon-intensive to operate and by reducing the amount of carbon embodied in building materials, components, assemblies, buildings and communities.

The showcase BARN building, to be located on McGill’s Macdonald campus, will include laboratories for an interdisciplinary team of experts in energy, ecology, landscape, forestry, architecture, and construction. It will incorporate a state-of-the-art workshop for processing timber, and space for assembling and testing innovative building technologies at full scale.

The Mac campus site will also enable the team to use wood harvested sustainably from the Morgan Arboretum to be processed and used in the design and construction of novel buildings in the as part of the facility’s “research-develop-demonstrate workflow,” says Professor Jemtrud. The large, interdisciplinary team capitalizes on the vast intellectual resources in the School of Architecture and in other Faculties and will train the next generation of professionals in carbon-neutral and climate resilient design.