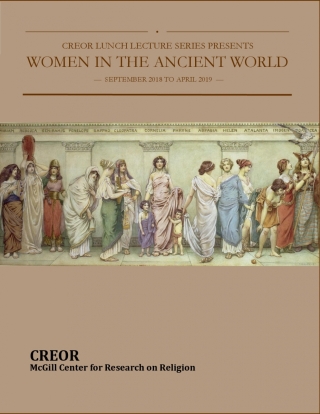 Women in the Ancient World

This Thursday lunch lecture series focuses on women in the ancient world. How did women live 1500-3000 ago, what did they feel, think and believe in, what did they produce and achieve? Recent research has uncovered many hidden treasures about the world in which women lived and were part of, from ancient Egypt and Babylonia to ancient Israel and Early Judaism, from the Greco-Roman world and Early Christianity to Byzantium and early Islam, of which much is now accessible through ancient writings, art and archeology. Join our lecture series with informative and exciting presentations, images never seen before, and a light lunch and fellowship with graduate students and faculty. Topics will include women in the Ancient Near East, Women in Ancient Israel, women in Early Judaism, women in the Greco-Roman World, women in early Christianity, women in Rabbinic Judaism, and women in Byzantium.

This lecture series is organized by McGill’s Centre for Research on Religion, the Montreal Biblical Colloquium, the School of Religious Studies and the Department of History and Classics.

Audience: Members of the McGill Center for Research on Religion, students and faculty of the School of Religious Studies, the Department of History and Classical Studies, the Montreal School of Theology, MORSL, interested lay people.

“Women, Gender, Classics and the Bible”

* Please note that this Special lecture will take place from 9:30 to 12:00 on Friday

PATRICIA KIRKPATRICK has spent the past 33 years teaching both in the academy and the Anglican Church here in Montreal and abroad. She has contributed to the educational formation of those pursuing academic careers in Old Testament/Hebrew Bible and those entering the ordained ministry of the Christian Church. She has pursued her research and teaching interests with an eye on both the academy and the ecclesial communities as she was asked to serve on a number of national and international theological commissions. Her interdisciplinary interests extend to feminist and gender studies where as chair of the Women’s Studies Program, and Chair of the Board of the M.C.R.T.W. at McGill, she was instrumental in creating and maintaining several administrative programs in the area.