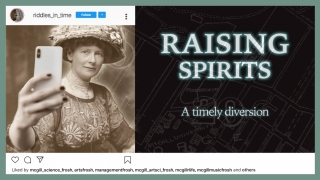 The McGill library proudly produced its first Orientation Game, “Raising Spirits: A Timely Diversion,” during the time of Covid disruptions, when McGill’s library and buildings were closed. Disruption is central to the game narrative where, in a controlled environment, players have to save the day and rid the virtual campus of an unknown and mysterious scourge. The digital escape room game experience is a safe way for students and McGill Alum, and Montrealers a way to explore the campus, learn about some of the riches in our collections, hear intriguing stories of McGill’s past, all the while becoming become familiar with the library’s many services.

In anticipation of the release of Part 2 of the game in time for Hallowe’en, join key members of the dedicated game development team as they reveal the secrets behind what inspired this innovative project and what it took to get it off the ground.

Creative Director, Paul Darvasi, is an educator, game designer, speaker, and writer whose work looks at the intersection of games, culture, and learning. A McGill alumnus, Paul teaches English and media studies at Royal Saint George’s school in Toronto, holds a PhD in Critical Media Literacy, and is a founding member of the PlayLab at the University of Toronto. His research explores how adolescents can use commercial video games as texts for critical analysis.

2D and 3D Artist, Elisa Navarro Chinchilla, Director of Gargamel Estudio, and a videogame designer based in Mexico city, with more than 20 games for companies and organizations such as United Nations, Televisa, Philharmonic Orchestra of the National University, Children Museum Papalote, amongst others. MA in Media and Education at the Institute of Education at UCL, UK. Her last game, Chuka: break the silence is a game to prevent gender violence and to reinforce socioemotional learning; and currently developing a videogame to prevent obesity amongst children.

Paul, Nick and Elisa will be joined by game development team members who were based in the McGill Library: Julien Couture, Hannah Deskin, Greg Houston, and Aeron MacHattie.

Curious about the game? Play through the game here: https://sites.google.com/view/raising-spirits/home