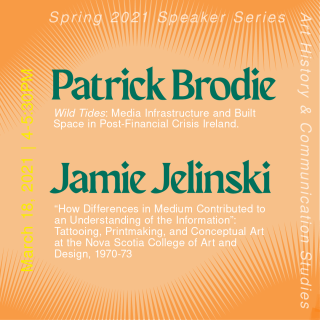 Abstract: Wild Tides: Media Infrastructure and Financial Crisis in Ireland articulates the ways in which the circulatory logics of contemporary capitalism are mapped within the Republic of Ireland through the spatial lens of media industries and their infrastructures. Building upon critical geography, media, and cultural studies research on infrastructure, financialization, and logistics, Wild Tides unpacks the shifting cultural and economic policy logics in Ireland since the global financial crisis of 2007-2008. The effects of this crisis in the country revealed the extent to which Ireland’s political, economic, cultural, and environmental futures were tethered to the turbulence of global financial markets and trade through an over-dependence on foreign investment as a resource for economic development. In the aftermath of the crisis, compelled towards austerity and widespread privatization by the bailout conditions of international monetary agencies, this dependence intensified across many sectors of the Irish economy, especially the media and technology industries. The book unravels the dense cultural and political entanglements of this post-crisis environment across four chapters, taking the reader through Ireland’s unique history of economic liberalization and post-developmentalism and their resonance within contemporary media economies; the role of the media and “creative industries” in the country’s spatial planning as a tool of economic recovery; the expanded geographies of transnational media policy and its labor implications; and the role of the technology industries and their data infrastructures in Ireland’s spatial and environmental futures. Although these political and economic formations in Ireland appear increasingly “natural,” the book argues that more “wild” frictions that arise at their point of implementation open apertures towards different ways of thinking about futures beyond the turbulence of global capital.

Biography: Patrick Brodie is an FRQSC Postdoctoral Fellow at McGill University. He completed his PhD at Concordia University. His current research project analyzes the cultural, environmental, and postcolonial geopolitics of data and energy infrastructures across the border between the Republic of Ireland and Northern Ireland. His work has appeared in Media, Culture and Society, Culture Machine, Environment and Planning E: Nature and Space, among other venues.

“How Differences in Medium Contributed to an Understanding of the Information”: Tattooing, Printmaking, and Conceptual Art at the Nova Scotia College of Art and Design, 1970-73

This paper investigates how Halifax-based tattooist Robert “Bob” MacLean became involved with several artistic pursuits at the Nova Scotia College of Art and Design during the early 1970s. Situating MacLean’s collaborative efforts within broader changes the school concurrently experienced, I analyze an exhibition of his drawings, a print he produced at the institution’s Lithography Workshop, and a conceptual artwork spearheaded by famed contemporary artist Vito Acconci. In doing so, I argue that MacLean bridged longstanding gaps between tattooing and visual art, thus reframing how his work, as a form of commercial visual culture, was produced, consumed, and understood.

Biography: Jamie Jelinski is a Fonds de recherche du Québec – Société et culture Postdoctoral Fellow, having completed his PhD in Cultural Studies at Queen’s University during 2019. His writing has been published in Urban History Review, Journal of Canadian Studies, Études Inuit Studies, and Visual Anthropology. He is currently finalizing a book on the history of commercial tattooing in Canada that is under contract with McGill-Queen’s University Press and beginning another that investigates the custodianship of “hidden images” by Canadian institutions.