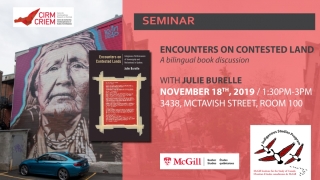 How does the artistic self-representation of indigenous people in Quebec influence the nature and identity discourse of French Québécois “de souche”? What is the place of indigenous artistic performances in Quebec’s decolonization and political discourse?

This seminar will be an opportunity to learn more about the intersect between the indigenous artistic self-representation in Quebec, and the identity discourse of French Québécois “de souche,” in light of the work “Encounters on Contested Lands,” authored by Julie Burelle. Panelists from the indigenous performance sphere in Quebec and the academic sphere will join the discussion and share their different perspectives on Quebec’s contested nature. This event, organized in cooperation with the Quebec Studies Program and the Indigenous Studies Program of McGill University, will be bilingual. Registration is mandatory; please confirm your presence by following this link.

In “Encounters on Contested Lands”, Julie Burelle employs a performance studies lens to examine how instances of Indigenous self-representation in Québec challenge the national and identity discourses of the French Québécois de souche—the French-speaking descendants of white European settlers who understand themselves to be settlers no more but rather colonized and rightfully belonging to the territory of Québec.
Analyzing a wide variety of performances, Burelle brings together the theatre of Alexis Martin and the film L'Empreinte, which repositions the French Québécois de souche as métis, with protest marches led by Innu activists; the Indigenous company Ondinnok's theatre of repatriation; the films of Yves Sioui Durand, Alanis Obomsawin, and the Wapikoni Mobile project; and the visual work of Nadia Myre. These performances, Burelle argues, challenge received definitions of sovereignty and articulate new ones while proposing to the province and, more specifically, to the French Québécois de souche, that there are alternative ways to imagine Québec's future and remember its past.
The performances insist on Québec's contested nature and reframe it as animated by competing sovereignties. Together they reveal how the "colonial present tense" and "tense colonial present" operate in conjunction as they work to imagine an alternative future predicated on decolonization. Encounters on Contested Lands engages with theatre and performance studies while making unique and needed contributions to Québec and Canadian studies, as well as to Indigenous and settler-colonial studies.