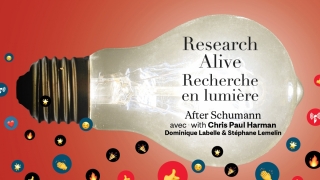 Unveiling what makes music so magical in the ears and minds of the listener through keynote presentations featuring collaborations between researchers and performers.

Composer Chris Paul Harman will discuss how the whole of Schumann's song cycle Frauen-Liebe und Leben (1830) served as a model for his own eight-movement After Schumann III (2020), as well as ways in which Schumann's vocal lines have been reimagined as "piano lines," with demonstrations by Dominique Labelle and Stéphane Lemelin. The presentation will conclude with the world première performance of After Schumann III.

Keep informed on how COVID-19 affects the Schulich School of Music via our FAQ.

This lecture will be webcast.