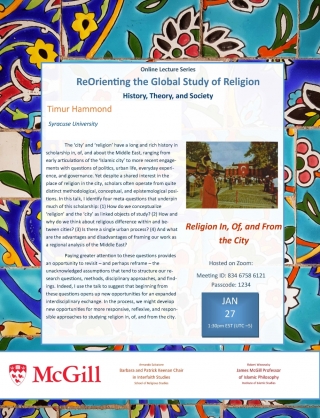 Prof. Timur Hammond, Syracuse University, will speak on: Religion In, Of, and From the City

The Keenan Chair of Interfaith Studies and the James McGill Professor of Islamic Philosophy are collaborating in a reflection on religion, Islam, and cosmopolitanism associated with McGill’s academic tradition of Islamic Studies, and epitomized by scholars such as Wilfred Cantwell Smith, Fazlur Rahman, and Toshihiko Izutsu.

In preparation for the Keenan Conference on World Religions and Globalization, to be held in Montreal in Spring 2022, we are hosting an online lecture series titled ReOrienting the Global Study of Religion: History, Theory, and Society. While the study of the Islamosphere has stimulated a critical reconceptualization of the notion of religion, we would like to extend this reflection to how religious concepts have been embedded in broader views of history and society, including the Western colonial construction of the “Middle East” as the cradle not just of Islam but of all Abrahamic religions.

The ‘city’ and ‘religion’ have a long and rich history in scholarship in, of, and about the Middle East, ranging from early articulations of the ‘Islamic city’ to more recent engagements with questions of politics, urban life, everyday experience, and governance. Yet despite a shared interest in the place of religion in the city, scholars often operate from quite distinct methodological, conceptual, and epistemological positions. In this talk, I identify four meta-questions that underpin much of this scholarship: (1) How do we conceptualize ‘religion’ and the ‘city’ as linked objects of study? (2) How and why do we think about religious difference within and between cities? (3) Is there a single urban process? (4) And what are the advantages and disadvantages of framing our work as a regional analysis of the Middle East?

Paying greater attention to these questions provides an opportunity to revisit – and perhaps reframe – the unacknowledged assumptions that tend to structure our research questions, methods, disciplinary approaches, and findings. Indeed, I use the talk to suggest that beginning from these questions opens up new opportunities for an expanded interdisciplinary exchange. In the process, we might develop new opportunities for more responsive, reflexive, and responsible approaches to studying religion in, of, and from the city.

Timur Hammond is an Assistant Professor in the Department of Geography and the Environment at Syracuse University. Trained as a cultural and urban geographer, his research examines the practices and processes through which people encounter cities as meaningful places. His current book project focuses on the Istanbul district of Eyüp and uses that district’s 20th century transformations to show the changing geographies of Islam over the past century. He has also published on the relationship between geography and Middle East area studies and on the politics of memory following Turkey’s July 2016 coup attempt.