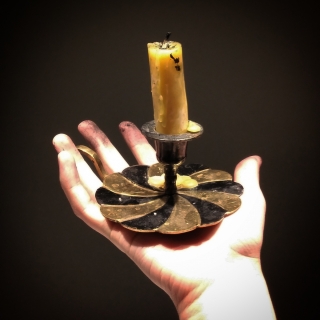 How can wellness be imagined for and by survivors of ongoing, intersectional trauma? Addressing trauma as experienced by individual, chronically ill bodies and on an ecological scale, these poems turn to secular ritual and magic as ethical structures that may permit healing to coexist and engage politically with complex harms.

Rebecca Salazar (she/they) is the author of the knife that justifies the wound (Rahila’s Ghost) and Guzzle (Anstruther Press), a poetry editor for The Fiddlehead and Plenitude magazines, and a PhD candidate living on the unceded territory of the Wolastoqiyik and Mi’kmaq peoples.

For far too long we have othered nature; the distinction between humans and the land has only bolstered illusions of authority and hierarchy. If, as Phyllis Webb suggested, poetry cannot change the world, it can change individual consciousness—starting with the poet’s—in efforts to understand the “and” between “one” and “one.” This reading explores ecological grief, the responsibility of connection, and gratitude.

christian favreau is a poet and activist living in Montréal (Tiohtiá:ke). His work has appeared in The McGill Daily Literary Supplement and Vallum. His forthcoming book of poetry with JackPine Press will be available in late 2020.

In “Talking to Grief,” poet Denise Levertov depicts grief as a stray dog desiring the companionship of the speaker—suggesting that taking ownership of grief transforms both the emotion and those experiencing it. In dialogue with Levertov, Jaeggle’s Night of the Crash, a sequence of poems on the death of the narrator’s son, proposes that wellness is only antithetical to grief when grief is denied its history.

M.W. Jaeggle’s poetry has appeared in The Antigonish Review, Contemporary Verse 2, The Dalhousie Review, Vallum, The Veg, and elsewhere. He is author of two chapbooks, Janus on the Pacific and The Night of the Crash. While pursuing an MA at McGill, Mike served as Poetry Editor at Scrivener Creative Review and was awarded the Mona Adilman Prize in poetry. Currently Poetry Editor at Montreal Writes, he lives in Vancouver.