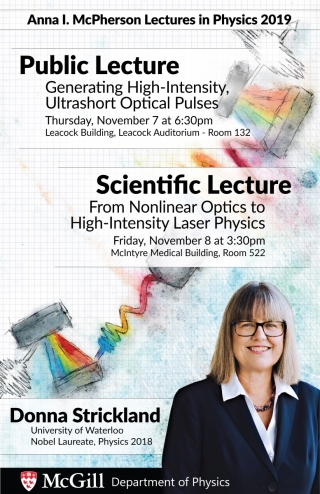 A prize public talk by Dr. Donna Strickland (Nobel Laureate in Physics 2018), from the University of Waterloo.

* Open to everyone, no prior knowledge of physics required!

This year, we have the honour of having Dr. Strickland talk about the work for which Gérard Mourou and she were awarded the Nobel Prize in Physics in 2018.

With the invention of lasers, the intensity of a light wave was increased by orders of magnitude over what had been achieved with a light bulb or sunlight. This much higher intensity led to new phenomena being observed, such as violet light coming out when red light went into the material. After Donna Strickland and Gérard Mourou developed chirped pulse amplification, also known as CPA, the intensity again increased by more than a factor of 1,000 and it once again made new types of interactions possible between light and matter. They developed a laser that could deliver short pulses of light that knocked the electrons off their atoms. This new understanding of laser-matter interactions, led to the development of new machining techniques that are used in laser eye surgery or micromachining of glass used in cell phones.

**The annual Anna I. McPherson Lectures series in Physics were established in honour of Anna Isobel McPherson, a member of the McGill Physics Faculty from 1940 until her death in 1979. Over her long association with the Department of Physics, Anna McPherson made important contributions in teaching, research, and counselling, helping and teaching a very large number of students. The McPherson lecture series was established to acknowledge her outstanding generosity and her many valued academic contributions. The mandate of these lectures is to bring a distinguished physicist to McGill each year to give two lectures, one of which is a lecture for the general public.**