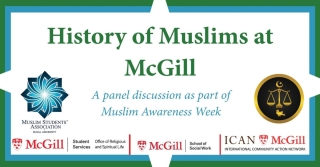 Over the decades, Muslims at McGill have had an impactful, yet not-so-famous influence and contributions within the McGill community. They have existed as intellectual figures within the Institute of Islamic Studies at the University, prominent staff members, influential students, and distinguished alumni. On Wednesday, January 27th from 6:00 - 7:30 PM (EST), come and join Muslim Awareness Week in collaboration with many on-campus groups to get a taste of the History of Muslims at McGill.

Ehab Lotayef is a Canadian IT Manager, poet, writer and community activist, of Egyptian origin. Ehab has been working at McGill University, as an IT manager, since 1999. Ehab is deeply involved in social and community work, including campaigns against the sanctions and war on Iraq, opposing the blockade of Gaza and advocating for Native Rights. Over the years he served on the boards of Egyptian Canadian Coalition for Democracy (Pres.), Muslim Council of Montreal, Muslim Schools of Montreal, the Canadian Arab Federation (V.P.), Fair Vote Canada and is currently serving on the Board of Governors of McGill University and Montreal City Mission. As a poet and writer, Ehab published a bilingual poetry collection: "To Love a Palestinian Woman" (TSAR 2010) and the CBC produced his play "Crossing Gibraltar" in 2006. Ehab also served on the boards of Teesri Duniya Theatre and CKUT Radio and is currently serving on the board of the Quebec Writers federation.

Mohamed Shaheen completed his Bachelor’s degree at Dalhousie University, Halifax, before moving to Montreal to complete his Masters and Ph.D. degrees in Electrical Engineering at McGill University. Mohamed has been involved over the past decade in several community organizations, where his focus has been on civic engagement, advocacy, cross-cultural exchange, and civil liberties. He was part of the Muslim Students Association at McGill University. In 2013, he founded the Silk Road Institute and served as the organization’s Founding Executive Director. He now serves as the organization’s Chair of the Board of Directors. Additionally, he continues to advise several Montreal-based organizations. His writings have appeared in the Globe and Mail and the Montreal Gazette, and he has been featured on CBC Radio One.

Dr. Amal Elsana Alh'jooj is the Executive Director of the McGill ICAN. Amal has 20 years of experience working as an activist focusing on Minority and women’s rights in Palestine/Israel. She is a founder of AJEEC and a past co-executive director of AJEEC-NISPED. She earned her BA in social work at BGU in Israel/Palestine and her MA in community organizing at McGill University in Canada. Upon her return from Canada, Amal worked to implement innovative methods of changing the stable but inherently unjust equilibrium characterizing the Palestinian national minority in Israeli state and the Bedouin of the Negev. Through her Ph.D.at McGill University, Amal explored the tensions, problems, limits, inherent in Social-change Service Organizations/Community organizations. The title of her dissertation was “Managing the Tensions Facing Indigenous Minority Social Change Service Organizations that Combine Service Provision and Advocacy”. Currently, Amal is a postdoctoral fellow at Women and Public Policy Program at Kennedy School, Harvard University.