Museum's fossil plant on the road for Canada 150 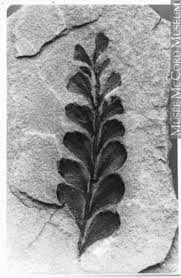 To mark Canada's 150 anniversary, the Alliance of Natural History Museums of Canada (ANHMC), in partnership with the Canadian Museum of Nature (CMN) and the Royal British Columbia Museum (Royal BC Museum), have collaborated to produce a nationally travelling Fossils Exhibition. Featuring some of Canada's most impressive, famous and significant fossils or replicas, this exhibition will be presented at ANHMC member museums across Canada over a three year period.

On the road with this unique travelling exhibit is a special paleoplant:  Archeopteris gaspiensis. This 280 year old fossilized frond was collected and named by Sir John William Dawson, the founder of the Redpath Museum.

This plant grew in the Devonian forests of what is now the Gaspé of Quebec. In 1871 Dawson found and designated Archeopteris gaspiensis as the Type or name bearer of these types of early vascular landplants. Dawson's published report was sent to Charles Darwin and Darwin's response is contained in a letter on exhibit at the Museum, in the Dawson Gallery, beside an exhibit about the fossil plants of the Gaspé.