Max Bell Policy Luncheon with Carolyn A. Wilkins, Senior Deputy Governor at the Bank of Canada 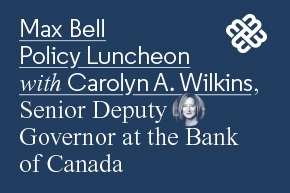 Join the Max Bell School of Public Policy for a luncheon with Carolyn A. Wilkins, Senior Deputy Governor at the Bank of Canada. Ms. Wilkins will shed light on the major public policy issues surrounding monetary policy frameworks and how those issues have increased in complexity in the post-crisis world.

About Carolyn A. Wilkins.

Carolyn A. Wilkins was appointed Senior Deputy Governor for a term of seven years beginning 2 May 2014. In this capacity, she oversees the Bank’s strategic planning and economic and financial research. As a member of the Bank’s Governing Council, she shares responsibility for decisions with respect to monetary policy and financial system stability. Ms. Wilkins also oversees the Bank’s analysis of international economic developments in support of monetary policy decisions. She is a member of the Bank’s Board of Directors.

Ms. Wilkins is the Bank of Canada’s G20 and G7 Deputy. She represents the Bank on the Financial Stability Board (FSB) Plenary and is a member of the FSB’s Standing Committee on Assessment of Vulnerabilities. She is also a member of the IMF’s High Level Advisory Group on FinTech. She previously represented Canada on the Basel Committee on Banking Supervision (BCBS) and co-chaired the BCBS Working Group on Liquidity.

Prior to her appointment as Senior Deputy Governor, Ms. Wilkins was Advisor to the Governor, with a focus on the Canadian economy, its interaction with the financial system, and monetary policy. From 2011 until 2013, Ms. Wilkins was Managing Director of the Bank’s Financial Stability Department. In this role, she led the Bank’s research and analysis of financial system issues in Canada and abroad, including the ongoing assessment of risks to financial system stability. She was also responsible for oversight of systemically important payment, clearing and settlement systems.

Previously, as Deputy Managing Director of the Financial Markets Department, she led the development and implementation of extraordinary liquidity tools and collateral policy deployed during the financial crisis.

Prior to joining the Bank in 2001, Ms. Wilkins held senior analytical roles related to economic forecasting and fiscal policy development, at both the Department of Finance Canada and the Privy Council Office.

Carolyn A. Wilkins, Senior Deputy Governor at the Bank of Canada 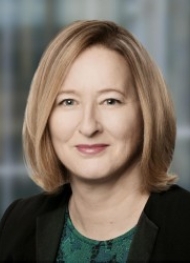