Grand Rounds: When the spark goes out: The neurology of apathy and motivation

Disorders of motivation are common across brain disorders. Neurologists frequently encounter pathological apathy across a range of conditions, including neurodegenerative disorders such as Parkinson’s disease (PD) and small vessel cerebrovascular disease (SVD). Unfortunately, we understand very little about the mechanisms underlying apathy.

In this talk, I’ll put forward a conceptual framework with which we can begin to understand apathy by considering the processes that normally underlie motivated, goal-directed behavior. In particular I’ll focus on the ability to generate options for behavior and effort-based decision making for rewards. Recent studies of the latter have been particularly revealing in both healthy people and patient populations.

Several lines of evidence suggest that when we make decisions about how much effort we might invest in actions, we weigh up the costs involved for the potential rewards to be obtained. Functional imaging in healthy people reveals both medial frontal and ventral striatal involvement when individuals make such decisions. In PD and SVD patients with apathy, this evaluation is altered. These individuals show blunted sensitivity to rewards and less inclination to invest effort for low rewards than healthy individuals. Both these factors can be improved by dopaminergic medication in PD. The findings support the view that it might be possible to provide a mechanistic account of the syndrome of apathy. 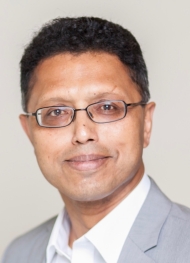 Masud Husain is Professor of Neurology & Cognitive Neuroscience at the University of Oxford and Wellcome Trust Principal Research Fellow. He leads the Neurological Conditions theme of the Oxford Biomedical Research Centre and is Professorial Fellow at New College, Oxford. Masud is Co-Chair of the European Academy of Neurology Scientific Panel on Higher Cortical Functions and is Editor elect of the journal Brain. His research focuses on mechanisms underlying memory and motivation deficits in healthy people and patients with neurodegenerative disorders, including Parkinson’s disease, Alzheimer’s disease and small vessel cerebrovascular disease.
Last updated: 09/08/2020 - 17:19
Back to top
McGill University
Copyright © 2021 McGill University
Accessibility Log in