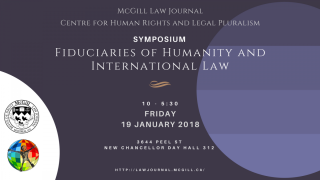 Public international law has embarked on a new chapter. Over the past century, the classical model of international law, which emphasized state autonomy and interstate relations, has gradually ceded ground to a new model. Under the new model, a state’s sovereign authority arises from the state’s responsibility to respect, protect, and fulfill human rights for its people. In Fiduciaries of Humanity: How International Law Constitutes Authority, Evan J. Criddle and Evan Fox-Decent argue that these developments mark a turning point in the international community’s conception of public authority. Under international law today, states serve as fiduciaries of humanity, and their authority to govern and represent their people is dependent on their satisfaction of numerous duties, the most general of which is to establish a regime of secure and equal freedom on behalf of the people subject to their power. International institutions also serve as fiduciaries of humanity and are subject to similar fiduciary obligations. The authors apply the fiduciary model to a variety of current topics and controversies, including human rights, emergencies, the treatment of detainees in counterterrorism operations, humanitarian intervention, and the protection of refugees fleeing persecution.

Organized by the McGill Law Journal, in collaboration with the Centre for Human Rights and Legal Pluralism, and with financial support from the Social Science and Humanities Research Council.

A request has been made for accreditation for 3 hours and 45 minutes of continuing legal education for jurists by a recognized provider.