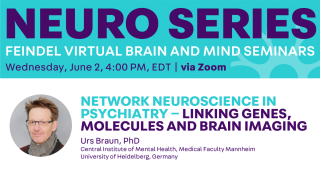 Abstract: Network neuroscience approaches have greatly contributed to establishing the view of mental disorders as dysfunctions of distributed circuits and networks, providing a biologically meaningful way of mapping large-scale abnormalities in the architecture of brain networks. However, traditional network approaches in brain imaging are rather descriptive, often failing to identify pathophysiological mechanisms that link system-level phenomena to the multiple hierarchies of brain function, including gene and neurotransmitter systems.

In my talk, I will shortly review the evolving concepts of brain network dysfunction in clinical populations, concentrating on schizophrenia as an example. I will discuss the benefits and limitation of traditional approaches and provide examples of how novel network tools can - in combination with pharmacological imaging and genetic analyses - address some of the challenges and can help pave the way for a more integrated understanding of brain dysfunction in mental disorders.

His lab focuses on applying novel methods derived from complex system theory and network neuroscience to tackle scientific questions at the intersection of psychiatry, neurobiology and social science. The lab uses and develops tools including multimodal neuroimaging, ambulatory assessment, genetics and psychopharmacology to study functional and structural brain networks and their perturbation in mental disorders, neuromodulatory transmitter systems (especially dopamine) and their influence on cognitive processes and has recently developed an interest in meta-scientific analysis of psychiatric research collaborations, publications and (historical) development of psychiatric ideas and topics.

Related Links:
Registration
All recordings in the Feindel Virtual Brain and Mind Seminar at The Neuro
Last updated: 05/27/2021 - 10:47
Back to top
McGill University
Copyright © 2022 McGill University
Accessibility Log in