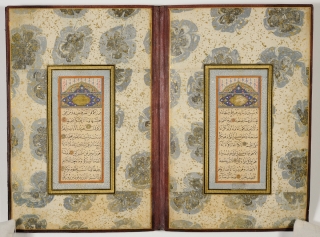 Established in Anatolia in the 13th century, the Ottoman Empire progressively expanded its domination to the Balkans, parts of Southeast and Central Europe, Western Asia, the Caucasus, and North Africa. At the beginning of the 17th century, the empire ruled over 32 provinces, and a population of approximately thirty million. Encircling the Mediterranean, with Constantinople (today’s Istanbul) as its capital, this incredibly powerful state remained at the center of interactions between the East and the West until 1922. The Ottoman Empire was a region of great demographic diversity including various ethnic, linguistic and religious groups; Arabs, Persians, Turks, Kurds, Greeks, Armenians, Jews, Christians, Sunni and Shi‘i Muslims, among others all inhabited the area under Ottoman rule. Although the language used for official communication was Ottoman Turkish (Turkish written in Arabic script), Arabic –used for administrative, religious, literary and educational purposes–, and Persian –limited to literature and education– were also official languages.

Earliest examples of Turkish illuminated manuscripts were produced in the period of the Anatolian Seljuks (13th century). Throughout the centuries, Ottoman scribes and bookbinders developed an Ottoman style of book decoration characterized by the fusion of divergent influences such as Byzantine, Mamluk, Persian, and Chinese. This exhibition provides beautiful examples of traditional Ottoman handicrafts such as calligraphy, illumination, bookbinding, and paper marbling, and reflects book art trends of the period and region dominated by the Empire. The selection of manuscripts wouldn’t have been possible without the descriptions provided in two articles about McGill Library’s collections of Ottoman-Turkish manuscripts* and of Qur’anic Codices** authored by Dr. Adam Gacek.

The exhibition was curated by Anaïs Salamon, Head of the Islamic Studies Library, with the assistance of Jillian Mills and Ghazaleh Ghanavizchian, Senior Library Clerks.

The exhibition launch took place on September 7th and featured a discussion on Ottoman Book Art and the display with Dr. Aslıhan Gürbüzel, professor of Ottoman Studies at the McGill Institute of Islamic Studies.