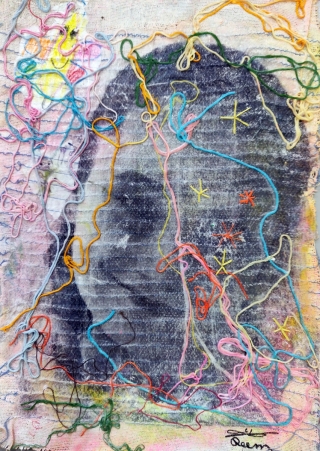 It began in 2016 at the Arts Council of Princeton, and includes “a total of over 150 new pages from the States, Switzerland, Colombia, Syria and Canada […] Each page marks a place, a person, an inspiration, and a moment in time. Whatever the participant’s process or previous experiences with the medium, the end result is always authentic, beautiful and compelling.”

Pages displayed in the Islamic Studies Library constitute the Syrian chapter of the Interwoven Stories International project. They were handcrafted in 2017 by Syrian children from Damascus under the supervision of Reem Khatib, director of the Damascus Open Art Space.

'Names Disappearing: Your Story Will be Told' is a textile collaboration between Diana Weymar and Mansour Omari, journalist and human rights defender who disappeared for a year in an underground Syrian prison in 2012-2013. When released, he promised his fellow inmates to let their families know they were still alive and smuggled out pieces of textile on which their names had been written. When Diana Weymar heard his story, she proposed to stitch those names with thread on "a long white cotton nightshirt" to make them more visible and deliver a powerful message. “If a story is told, it can be repeated by others and it lives on in that telling.