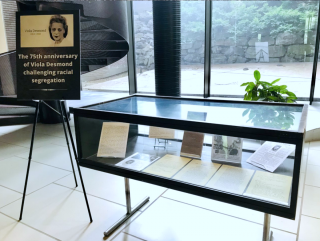 In November 1946, Viola Desmond, an African-Nova Scotian businesswoman, challenged racial discrimination when she refused to leave the segregated whites-only section of the Roseland Theatre in New Glasgow, Nova Scotia. After being forcibly removed from the theatre by police, arrested and charged, she refuses to accept the charges against her and takes her case to Nova Scotia’s Supreme Court, where she loses her appeal.

To commemorate the 75th anniversary of Viola Desmond challenging racial segregation, the Nahum Gelber Law Library presents an exhibition on her life and her struggle for rights in Canada.