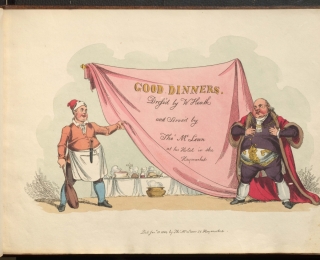 With the rise of digital communication, one way to connect with family and friends is over a meal or a board game. Bonding over food and games is a practice that has been around for centuries. Many 18th- and 19th-century communities gathered for dinners bountifully infused with play of all kinds to further their enjoyment of each other’s company. Among their favourite pastimes during meals was telling and solving riddles.

This digital exhibit introduces examples of different mealtime riddle practices. One, largely occurring in Britain between 1780-1840, involved formal dinners where guests sampled dishes described in riddles, written on cryptic menus – often called “Enigmatic Bills of Fare.” Another, known as “Conundrum Suppers,” were popularised in 1880s-1930s America and involved menus written in riddling form: guests had to play the game to decipher what they would eat!

Game-filled evenings were enjoyed elsewhere as well. In France, 19th-century diners ate meals served on intricately illustrated plates called “assiettes parlantes,” which would reveal pictorial riddles, or “rebuses,” once their plates were emptied. This led to conversations about possible solutions to the revealed puzzles. Once everyone had their fill of food and discussion, they could turn their plates over and discover the answers.

These food-themed riddling practices facilitated social cohesion and served up a portion of humour alongside the main dishes. Riddle me this: Is the time ripe to bring them back into fashion?

Curated by members of The SSHRC-funded Riddle Research team. The Riddle Project is an ROAAr project dedicated to transcribing, solving, and researching riddles in early manuscripts. The project is led by Prof. Nathalie Cooke, Associate Dean of ROAAr, along with a team of graduate and undergraduate research assistants.

This project is funded in part by the Social Sciences and Humanities Research Council of Canada's Insights Development Grant Program.