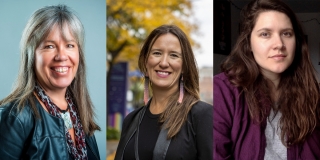 Second event of the speaker series How to Do Anti-Racist and Decolonial Work in the Academy and Beyond.

Are you open-minded? Do you welcome diversity and difference as an opportunity to learn and broaden yourself both professionally and personally? Are respect and dignity important for you in team building and community service?

This two-hour workshop with Vicky Boldo, Autumn Godwin and Laurence Lainesse is intended to provide a culturally safe space for exchange between each of the participants and the presenters. From a perspective of lived experience, we will discuss different strategies of resistance and solidarity implemented by the facilitators and participants in their own communities and within colonial structures of Canada and Quebec. Let's engage and explore how collective actions of solidarity and resistance can contribute toward the reconstruction of a more just and decolonial society.

This Zoom event is open to members of the Department of English and McGill students. Contact natasha.chenier [at] mail.mcgill.ca for more information.

Vicky Boldo is a Cree/Métis transracial adoptee from the 1960’s - she is a writer and registered energy medicine practitioner (ANQ). She plays a central role in the Urban Aboriginal community of Montreal. She was Co-Chair of the NETWORK from 2015 to September 2019, acts as an honorary board member for the Native Women’s Shelter of Montreal and for the National Indigenous Survivors of Child Welfare Network. She is currently the In-House Cultural Support worker at Concordia’s Aboriginal Student Resource Centre and a member of the Indigenous Directions Leadership Council for the University. Most recently she was appointed to the permanent Board of Directors for the National Sixties Scoop Healing Foundation. Vicky is an activist, cultural educator and support worker, violence preventions coordinator, speaker, mentor and research advisor and coordinator. Most importantly she is a daughter, a sister, an auntie and the proud mother of four and grandmother of 10. The 28+ years healing journey that Vicky has been on gives her the passion and focus to give back to the community and to use her voice for those that are still muted by colonial oppression.

Autumn Godwin is nehithaw iskwew from Montreal Lake Cree Nation located on treaty 6 territory in Northern Saskatchewan. Autumn returned to her ancestral land to reconnect to cultural practices as part of her journey to reclaiming her Indigenous identity. Her work is inspired by her own process and is grounded in reclaiming language, ceremony, and emancipatory practices. She wishes to pass on this traditional Indigenous knowledge to her children and to the next 7 generations. Autumn is currently enrolled in her Masters with Concordia’s Individualized Program where she is continuing her research about Indigenous cultural resurgence. She intends to share and disseminate her research as a means of facilitating the process of decolonization. She works for several community organizations in support of the Indigenous community in Montreal and is a research assistant within the self-managed research collective TREE’s (Transformative, Economy, Ecosystem, and Social Justice). Contributions to Concordia community: Member of First Peoples Studies Member Association, Research Assistant for TREE’s, Student Mentor for Start Up Nations, Assistant Coordinator for First Voices Week.

Laurence Lainesse (she/her) is a white settler whose most or her ancestors came from France to occupy/colonize the so called Nouvelle-France in the 1600’s. Born and raised on the south shore of Tiohtià:ke/Mooniyang/Montréal, she now lives on the island, non-ceded territories which the Kanien’kehá:ka are recognize as the custodian of the land and the waters. Laurence graduated from a bachelor in social work at University of Montreal. Her last year of full-time internship was co-supervised by Vicky Boldo and Catherine Richardson, both involve in the urban Indigenous Community in Tiohtià:ke/Mooniyang/Montréal. During those years of mentoring, Laurence became aware of the colonial continuities in the social work practice, particularly towards Indigenous communities, families and individuals. She is now writing her master in sociology at University of Montreal where she questions the colonial discourse in the French teaching of social work in Quebec.