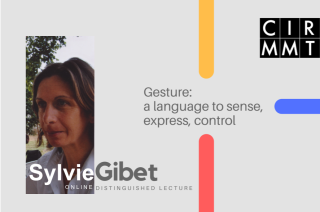 The rebroadcast of a Distinguished Lecture by a guest from IRISA (France) followed by an online live discussion with Prof. Gibet herself.

This session will feature the rebroadcast of the lecture presented by Sylvie Gibet on March 15, 2018 followed by a one-hour live discussion with Prof. Gibet herself. The main goal is to revisit the topic, and then, in the discussion that will follow, evaluate what has changed since the research was first presented. Participants are encouraged to submit their questions and comments in the chat of the platform used.

Research on gesture and movement very often dissociates linguistic issues from sensorimotor theories underlying the production of movement. Linguistics studies propose to identify units of action as linguistics components that can be combined to form the sense of movement. Conversely, sensorimotor studies tend to model movement by simulating the combined action of motor control and sensory information (visual cues, force feedback, etc.). In this talk, I will show that movement is also language, characterized by a set of meaningful actions, by the timing of the sequencing actions, and by the way the atomic elements are organized into patterns. Different examples of skilled and expressive gestures will illustrate this presentation, from physical theater, to sign languages and musical gestures.

Her research focuses on the modeling, analysis and generation of expressive gesture, with a focus on sensorimotor representations and time-shape motion descriptors. She has mainly studied expert gestures with strong semantics such as sign language gestures, but also musical gestures such as percussing or conducting gestures, or emotional theatrical movements. Sylvie has obtained numerous funding (CNRS, ANR, Programme d'Investissement d'Avenir) that have supported her research.