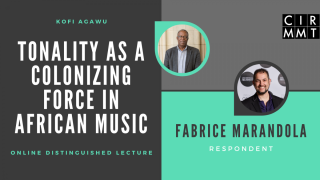 The rebroadcast of a Distinguished Lecture by a guest from Princeton University (USA) followed by an online live discussion with Prof. Fabrice Marandola as the respondent.

This session will feature the rebroadcast of the lecture presented by Kofi Agawu on February 19, 2009 followed by a one-hour live discussion with Prof. Fabrice Marandola as the respondent. The main goal is to revisit the topic, and then, in the discussion that will follow, evaluate what has changed since the research was first presented. Participants are encouraged to submit their questions and comments in the chat of the platform used.

Tonality accompanied Europe’s ostensibly civilizing mission to Africa. Christian hymns, choral anthems and light orchestral music for ballroom dancing were introduced in various locales. These and other accoutrements of modernity were built on tonal scaffoldings. Although recent postcolonial criticism has continued to interrogate aspects of Europe’s legacy in Africa—in matters broadly cultural, in language, and in political and educational systems—the pervasive and lasting impact of functional tonality and the consequent suppression of the richness and potency of indigenous or precolonial African tonal resources have not received adequate attention. This paper begins a critical assessment of the African reception of European functional tonality. I argue that a program for decolonization that ignores the transformation in African musical consciousness wrought by tonality, or overlooks the fact that many modern Africans remain trapped in a prison-house of tonality, cannot achieve its ultimate emancipatory goals.

Kofi Agawu is Professor of Music at Princeton University and Adjunct Professor at the University of Ghana, Legon. His work has focused on analytical issues in selected repertoires of Western Europe and West Africa. His books include Playing with Signs: A Semiotic Interpretation of Classic Music (1991), which won the Society for Music Theory’s Young Scholar Award in 1994, African Rhythm: A Northern Ewe Perspective(1995), Representing African Music: Postcolonial Notes, Queries, Positions (2003) and Music as Discourse: Semiotic Adventures in Romantic Music (2008). A Guggenheim Fellow in 1990-91, he received the Dent Medal from the Royal Musical Association, UK in 1992 and is a Fellow of the Ghana Academy of Arts and Sciences. 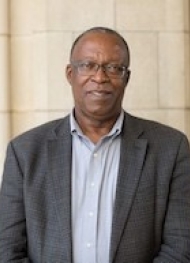 Kofi Agawu is Professor of Music at Princeton University and Adjunct Professor at the University of Ghana, Legon. His work has focused on analytical issues in selected repertoires of Western Europe and West Africa.
Last updated: 03/04/2021 - 16:32
Back to top
McGill University
Copyright © 2021 McGill University
Accessibility Sign in (site maintenance)