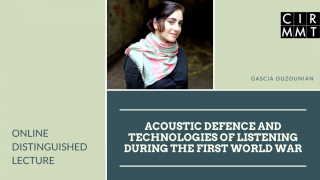 The rebroadcast of a Distinguished Lecture by a guest from University of Oxford (UK) followed by an online live discussion with Prof. Ouzounian herself.

This session will feature the rebroadcast of the lecture presented by Gascia Ouzounian on May 9, 2019 followed by a one-hour live discussion with Prof. Ouzounian herself. The main goal is to revisit the topic, and then, in the discussion that will follow, evaluate what has changed since the research was first presented. Participants are encouraged to submit their questions and comments in the chat of the platform used.

To access the event: www.cirmmt.org/join/DL6 (platform and details coming soon).

During the First World War new forms of warfare necessitated new methods of acoustic defense: tracking the enemy through listening. Referencing now-declassified military reports, military manuals and scientific literature from this period, this talk investigates the development of WWI-era acoustic defence technologies, including geophones, double trumpet sound locators, acoustic goniometers, the Baillaud paraboloïde and the Perrin télésitemetre. It examines new modes of listening that emerged in relation to these devices; it further uncovers historical phenomena like the establishment of Écoles d’écoute, “Schools of Hearing” where Allied soldiers received training in operating acoustic defence technologies. It argues that, during this period, the listening act was reconfigured as a complex, fragmented act of data collection in ways that prefigured modern notions of “machine listening.” Similarly, directional listening, which had previously been studied in terms of perceptual psychology, was newly understood in strategic terms: a tactical activity that could determine human and even national survival.

Gascia Ouzounian is Associate Professor of Music at the University of Oxford. She co-directs Recomposing the City, which brings together composers, sound artists, architects and urban designers in investigating creative approaches to sound in urban environments. She is artistic director of Optophono, a label that publishes interactive music and sound art. Her book Stereophonica: Sound and Space after 1850 is forthcoming from The MIT Press.