Beloved by audiences, lauded by critics and composers, and revered by singers, Johnson is known for crafting musical journeys that create deep connections between performers and listeners. The Wall Street Journal praised his ability to “find the emotional essence other performers often miss,” and Fanfare wrote that “Craig Hella Johnson has assembled and molded a first-rate choir to be respected as highly as the best we have had.” Distinguished composer John Corigliano wrote, “I believe that [Johnson] has understood my music in a way that I have never experienced before. He is a great musician who understands everything about the music he conducts.” Composer and collaborator Robert Kyr observed, “Craig’s attitude toward creating a community of artists who work together to interpret the score … goes beyond technical mastery into that emotional depth and spiritual life of the music.” Of Johnson’s performance of Beethoven’s Missa Solemnis, the San Antonio Express-News wrote: “Through all the amazing ebbs and flows of dynamics, the radiant balances, the seamless connection of episodes, the theatrically astute tempo relations, the unified structural arc, the music shone forth with organic naturalness. Nothing sounded fussed over. Everything just sounded right.”

Johnson is also Music Director of the Cincinnati Vocal Arts Ensemble and conductor emeritus of the Victoria Bach Festival. He was Artistic Director of San Francisco-based Chanticleer (1998-1999) and has served as guest conductor with the Austin Symphony, San Antonio Symphony, and many others in Texas, the U.S., and abroad. As the Director of Choral Activities at the University of Texas at Austin from 1990-2001, Johnson led the graduate program in choral conducting. He remains an active educator, teaching nationally and internationally with professionals and students at conferences and universities. He is also a frequent speaker at regional and national conferences of the American Choral Directors Association. Craig Hella Johnson joined the faculty at Texas State as Artist in Residence in fall 2016 and continues to inspire his colleagues and students in innovative teaching and programming as Professor of Practice.

A composer and arranger, Johnson works with G. Schirmer Publishing on the Craig Hella Johnson Choral Series, featuring specially selected composers as well as some of his original compositions and arrangements. His works are also published by Alliance Music Publications. A unique aspect of Johnson’s programming is his signature “collage” style: through-composed programs that marry music and poetry to blend sacred and secular, classical and contemporary, traditional and popular styles. In 2006 he was engaged to create a special peace-themed collage program for the North Central ACDA convention, and in 2007 by the famed St. Olaf Choir to create and conduct a collage program during a five-week residency. Craig’s first concert-length composition, Considering Matthew Shepard, was premiered in 2016 by Conspirare.

Johnson has been honored with numerous awards, including 2008 induction into the Austin Arts Hall of Fame, Chorus America’s 2009 Louis Botto Award for Innovative Action and Entrepreneurial Zeal, and the 2011 Citation of Merit from professional music fraternity Mu Phi Epsilon, the organization’s highest honor for a non-member. In 2012 he was an invited speaker for TEDxAustin. He was one of seven panelists for the Fetzer Institute and Eranos Foundation’s “Love and the Musical Arts” gathering in Switzerland in 2011. In April 2013 Johnson was designated the official Texas State Musician for 2013 by the Texas Legislature. The designation was recommended by the Texas Commission on the Arts after a competitive nomination process, and he is only the second classical musician to receive the honor in its eleven-year history. Johnson was awarded the 2015 Best Choral Performance Grammy® for conducting Conspirare on the CD The Sacred Spirit of Russia (Harmonia Mundi label). In June 2015 Johnson received The Michael Korn Founders Award for Development of the Professional Choral Art, Chorus America’s lifetime achievement award.

A Minnesota native, Johnson studied at St. Olaf College, the Juilliard School, and the University of Illinois and earned his doctorate at Yale University. As the recipient of a National Arts Fellowship, Johnson studied with Helmuth Rilling at the International Bach Academy in Stuttgart, Germany. He has been a Texas resident since 1990. 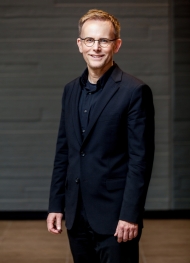