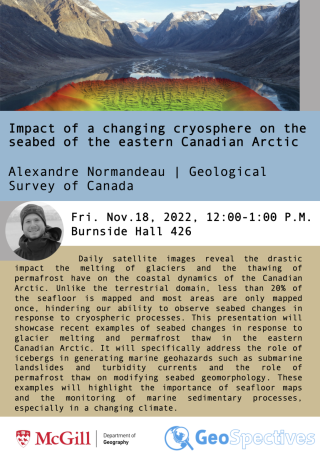 Abstract: Daily satellite images reveal the drastic impact the melting of glaciers and the thawing of permafrost have on the coastal dynamics of the Canadian Arctic. Unlike the terrestrial domain, less than 20% of the seafloor is mapped and most areas are only mapped once, hindering our ability to observe seabed changes in response to cryospheric processes. This presentation will showcase recent examples of seabed changes in response to glacier melting and permafrost thaw in the eastern Canadian Arctic. It will specifically address the role of icebergs in generating marine geohazards such as submarine landslides and turbidity currents and the role of permafrost thaw on modifying seabed geomorphology. These examples will highlight the importance of seafloor maps and the monitoring of marine sedimentary processes, especially in a changing climate. 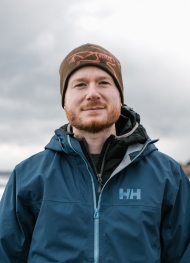 I am part of the Marine Environmental Geoscience group at the Geological Survey Canada (Atlantic). My research focuses on sediment transport processes and marine geohazards across a broad range of temporal and spatial scales. Specifically, my goal is to understand the triggers and the frequency of marine geological hazards such as submarine landslides and turbidity currents. If you are interested in working on marine geohazards in Canada, do not hesitate to get in touch with me.
Attachments:
normandeau.pdf
Last updated: 10/14/2022 - 14:02
Back to top
McGill University
Copyright © 2023 McGill University
Accessibility Log in