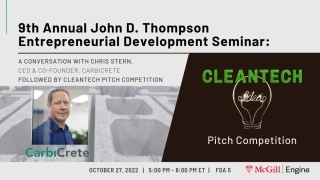 This year's seminar will have keynote speaker Chris Stern, CEO and Co Founder at CarbiCrete followed by a Cleantech Pitch Competition.

CarbiCrete is a Montreal-based carbon removal technology company that has created a cement-free, carbon negative process for making pre-cast concrete using industrial waste by-products from the steel-making industry. The patented technology stems from McGill Civil Engineering Professor Yixin Shao and his post-doc researcher at the time Dr. Mehrdad Mahoutian, CTO and co-founder of CarbiCrete. The R&D team received early-stage funding via the William and Rhea Seath Award in Engineering Innovation from the McGill Engine Centre. In addition to CarbiCrete, Chris serves as an Advisor and Director to several Cleantech companies in the US and Canada, including EnergyPal, a North American residential solar provider.

Before founding CarbiCrete, Chris was a Co-Founder and Director at Pure Energies Group, a residential solar customer acquisition company which was acquired by NRG Energy in 2014. Chris received his B. Eng. in Mechanical Engineering from McGill University.

About the John D. Thompson Entrepreneurial Development Seminar
This series was created to inspire Faculty of Engineering students to think about entrepreneurship and to think like an entrepreneur, whether they go on to start their own company in the future or be part of start-up or small/medium enterprise, or a large firm. In addition, we want to grow the entrepreneurial culture and spirit across the university.

Proposed solution: Mimicking and improving on the current prototype of a double-chamber microbial electrolysis cell system of biohydrogen production. Specifically, this idea of microbial electrolysis cell system will be incorporated into the proposed design project of a bioreactor; the bioreactor takes farm waste as an input toward dark fermentation, a process that yields acetic acid and few molecular hydrogen gas which will be transported to be stored in a compressed gas chamber.

Quantifying the environmental effects of a company is extremely hard and remains largely an untapped opportunity. Our idea is a non-profit data platform that tracks the environmental impact of products throughout their value chain. The algorithm will track several metrics such as water consumption, carbon emission, land use, plastic usage, electricity, use of non-renewable resources, etc. to output a specific sustainability score range.

Ikei aims to provide a low-cost, high-precision nutrient monitoring system for more efficient use of water and nutrients in hydroponic agriculture, and reduction of waste-water release. Typically, after multiple growth cycles, the nutrients in a hydroponic system become imbalanced, forcing growers to flush their system to prepare a new water culture. By monitoring the system’s nutrient content, nutrient water can be recycled through rebalancing, reducing costs and reducing waste.

Natural, eco-friendly mosquito repellent using mangrove leaf extract that targets disease-carrying mosquitoes in Ghana. Red mangrove extract is repellent and larvicidal against the main disease-carrying mosquitoes present in Ghana, including those that carry yellow fever, malaria, and filarial disease. Research has shown that red mangrove leaf extract is as effective as DEET against mosquitoes and sandflies while being nontoxic and derived from natural ingredients.

The research project is to design an energy storage device via new mechanism that can store as much energy as batteries but charge 2-10 times faster. Supercapacitors store more energy than double layer capacitors through redox reactions. Ideally, these redox reactions should allow multiple Faradaic electron transfers that overlap to form a near rectangular voltammetry profile to mimic double layer capacitance – hence the name “pseudocapacitance”.