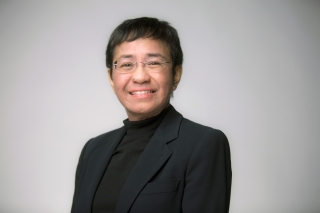 "The Battle for Facts: Critical for a Sustainable Future"

A journalist for 36 years, Ressa is the co-founder and CEO of Rappler.com, an online news organization in the Philippines.  She was awarded the Nobel Peace Prize in 2021 for her work as a fearless defender of independent journalism and freedom of expression – particularly her work exposing the human rights abuses of the authoritarian former President Rodrigo Duterte. She is the first Filipino recipient of the Prize. In her acceptance speech, Ressa issued the caution that, “Without facts, you can’t have truth. Without truth, you can’t have trust. Without trust, we have no shared reality, no democracy, and it becomes impossible to deal with our world’s existential problems: climate, coronavirus, the battle for truth.”

Nahlah Ayed, host of the CBC Radio One program Ideas, will emcee the event. A former parliamentary reporter and a veteran foreign correspondent, her work has garnered numerous awards including from the UK Foreign Press Association and the Canadian Association of Journalists. In 2012, her memoir, A Thousand Farewells, was shortlisted for a Governor General’s Literary Award. Ideas broadcasts weeknights at 8 p.m. (8:30 NT) on CBC Radio One and the CBC Listen App.

The Beatty Lecture is co-produced by McGill’s offices of Research and Innovation and University Advancement.

The event is open to the public.

Media are invited to contact the Beatty organizing committee with requests.